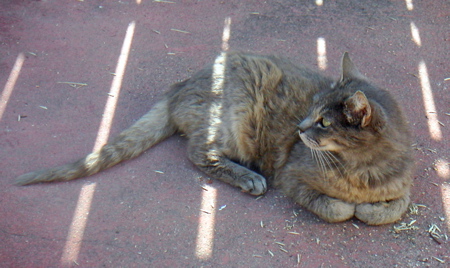 Here’s a first: Henry was more interested in being petted than eating this morning. He came running to greet me as usual, with his gruff yet muted meows, but after I put the food in his dish, he followed me when I went to put the measuring cup back into the food container. I petted him, and he pushed his head against my hand, and when I went to leave, he followed me again. I petted him more, and led him back to his dish, where I petted him until he started eating. I have to say it made me really happy, even though the girls were glaring furiously from the porch at this disgusting PDA.

In other news, it appears that the Mexicans have moved out, taking their incessantly yappy dogs with them. A moving truck appeared on Saturday, and yesterday, they seemed to be packing up the last of their things, including the aforementioned yappers. They actually swept up the poo from the ce-ment back yard, so it must be official. And the quiet was blissful! I hadn’t realized how hard the constant barking was on my nerves until it was gone.

It’s strange having the house next door dark and empty. It reminds me of the eerie stillness following a power outage, the background hum of appliances suddenly extinguished.

They cut every single flower from their garden before they left.