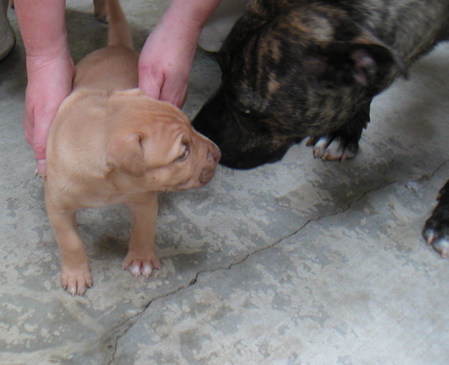 “My” puppy and her mother

Luckily for me, Friday was the day Megan works with the pit bulls at her local shelter. Not only did I get to hug Davis and Tulley again (I’m pleased to report that Echo, Tulley’s puppy, has been adopted!), but I got to spend some time with a pit bull mama and her eight puppies.

Armed with my nearly-decade old digital camera, I went into the big enclosure with my sister and her dear friend Lu, who also works with the PBs every Friday. I soon appreciated the expertise of certain photographers in taking photos of wiggly, busy dogs. These pups would not hold still for their close-ups, so you’ll have to forgive the quality of the photos and focus on the incredible cuteness of these little guys. 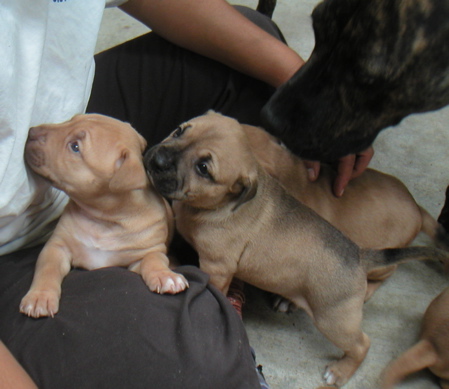 The mother had been very abused, so we were careful in approaching her and her babies. Having said that, she was so affectionate and leaned against me, looking up at me with her big, beautiful eyes. How anyone could hurt such a lovely trusting creature is completely beyond me. I’m glad she has a chance to find a loving home and is safe now.

There are eight puppies. They came out of their little igloo and started staggering around like drunken sailors. Some of them still had blue eyes, and I think they’re around three or four weeks old. When they wagged their tiny tails, they fell over! 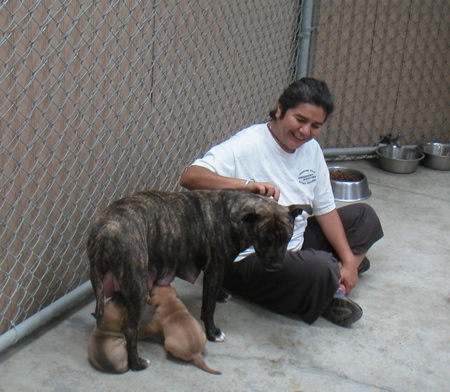 Beautiful Lu with mama and puppies

We were there to socialize the puppies, since they were very fearful of people at first. They have made a lot of progress since they’ve been at the shelter (the mother chose to give birth at a neighbor’s, knowing her own home wasn’t safe, and the neighbor brought them all to the shelter, probably saving the lives of all involved), and when I picked them up, they cuddled into my neck and made me giggle with their tickly puppy snuffling.

It was pretty much heaven, to tell you the truth.

My favorite was this little girl: 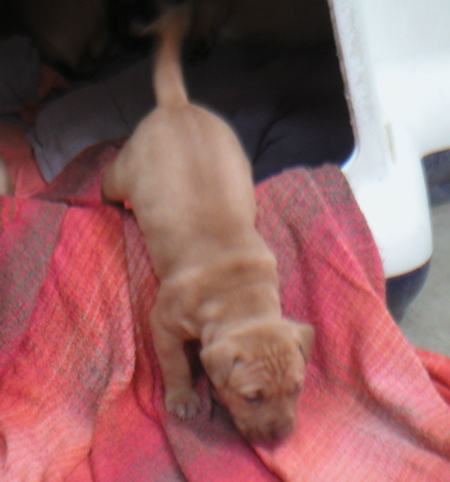 I love her worried little face (I’m a worrier, too), and her French manicure. When we left, she followed me to the gate and poked her little nose through, watching me as I left. I may be in trouble if I move up there. Megan says she’s going to name the puppy after me. How cool is that? I have had a goat named after me, but never a puppy.