‘Memba the bed I unwillingly bought from Wal-Mart all those years ago? You know, in the bad old days in bad old Oakhampton? It had been growing steadily more and more unreliable over the years, being cheaply made, despite not being particularly cheaply priced, and moving from my old house to my new(ish) one did not improve matters. Some bits and pieces did not survive the move, and lately, the bed tended to sort of fall apart, which tended to be disturbing for its many occupants, including Me.

As usual, I basically waited until it irretrievably broke down or no longer worked, much as I do with computers and phones. It is the Suzy Way. This time, I ordered the bed online. It arrived sooner than I expected, and of course it was unexpectedly rainy and muddy that day, and the box was slightly damaged. It took about all I had to drag it into the house, where it reposed in front of the ancient grandfather clock.

I called in the cavalry in the form of Megan and Rob, and left work early one day to meet them at Chez Suzy. I had already removed the mattress and box spring when they arrived, and the slats, and the zippered bags from under the bed. While Rob took the old bed apart, Megan and I opened up the box with the new one and took the pieces upstairs. Then we took the old bed pieces downstairs.

I knew that Rob was about the handiest person around, but I was surprised by how good Megan was at putting things together with the aid of pictograms and without the aid of her reading glasses. She put the drawers together while Rob worked on the bed frame. I sort of helped.

It didn’t take long before the bed frame and the drawers were ready: 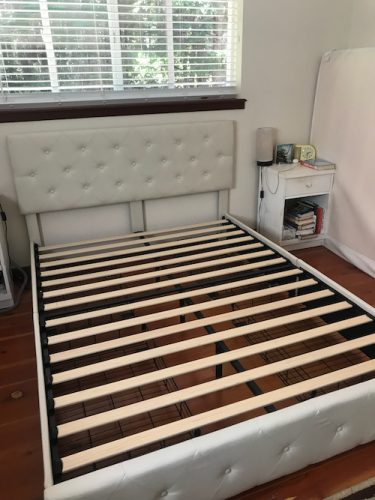 We decided I no longer needed the box spring, and somehow Megan and Rob managed to get it down the stairs despite the beams and slanting ceiling, and set it outside. I’m going to need someone with a truck to drag the box spring and the old bed bits to the dump, but I’ll Scarlett O’Hara that for now. 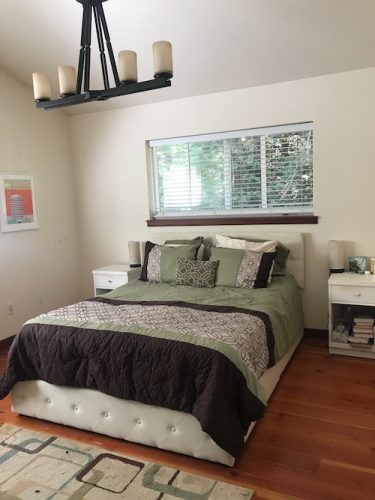 It’s upholstered in beige linen. I love how clean the upholstery looks (and it is, after I spot cleaned the parts that got muddied in transit), and the drawers will be a huge improvement over the zippered bags under the bed. No more bed skirt to try and hide them! Hooray! I am also pleased to report that it is super comfortable and I am really happy with it.

I don’t know what I would do without my family. I hope I never find out.

A YEAR AGO: Extra fun in an extra-long weekend.

TEN YEARS AGO: Filling in various holes, inside and out. 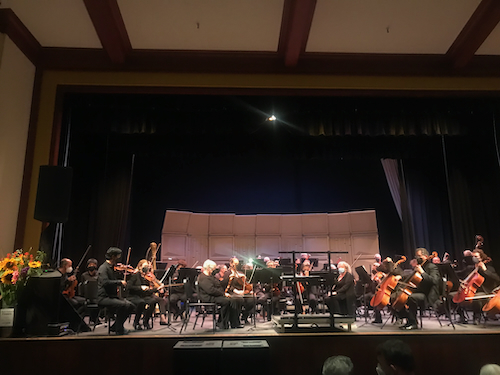 The first concert I saw was on the first night of the Festival, and also Buddy’s 40th birthday. The program started out with an original composition* by the Maestro, Allan Pollack, called “Phoenix”. It was beautiful, celebrating the victory of life over death and hope over despair. It was followed by Prokofiev’s Violin Concerto No. 1, with a young violinist, Yevgeny Kutik, giving a dazzling solo. The evening ended with Beethoven’s bright and delightful Symphony No.7.

The second one started out with the lovely, dreamy “Prelude to the Afternoon of a Faun” by Debussy, followed by Mozart’s light and charming Symphony No. 29, and ended with Brahms’ Concerto for Violin and Cello, featuring the extremely charismatic and talented Jennifer Cho and Jonah Kim on violin and cello.

The last one is the final show of the Festival, coming up this weekend, and it will be big band and jazz, which should be a fun end to the series.

*I was so delighted by “Phoenix” that I asked if they had a recording available, but unfortunately, there isn’t one, so it will just have to be a beautiful and haunting memory.

A YEAR AGO: At the fabulous Flamingo.

FIVE YEARS AGO: You win some, you lose some.

TEN YEARS AGO: An unexpected visit to the country. I never imagined I’d be living in Albion and loving it.

The 4th of July weekend brings the amazing Flynn Creek Circus to our little corner of the world, its distinctive striped tent and ticket caravan appearing in the Village like magic: 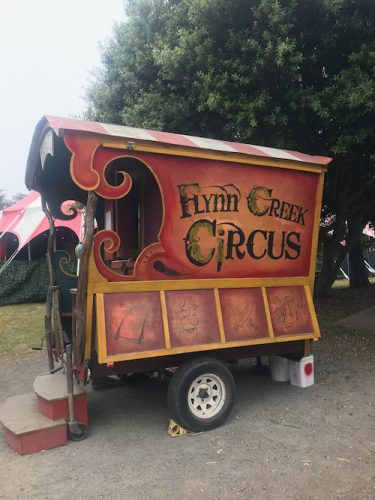 Usually, it is an amazing experience. But this time…

I noticed as I entered the tent that there were earplugs on a table near the concessions, and I thought that was a little odd, since it was a circus, not a rock concert, and in the early afternoon, when the audience was mostly families, including small children.

It all made sense when a trio of guitar, bass, and drums with a screeching singer was unleashed upon our unsuspecting eardrums. I endured the first “song”, played at high volume and low talent, and then there was some of the acrobatics I had come to see: 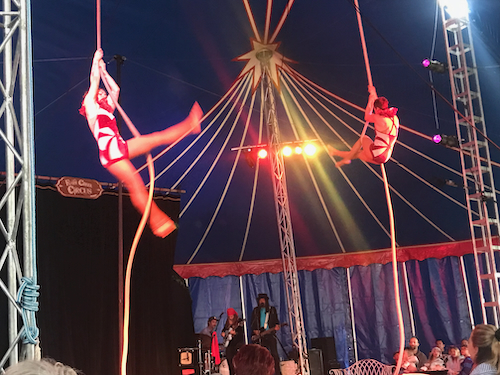 You can see the Nightmare Trio in the background. They started up again after the acrobats, and I noticed that the small girl sitting next to me was covering her ears and wincing, so I went to see if I could get her some ear plugs. They were (unsurprisingly) all gone, but the guy gave me a tissue she could ball up to protect what remained of her eardrums. I gave it to her, and she put it in and curled up against her mother. When another song started up and there was no sign of more of the actual circus, I actually got up and left. I never thought I’d walk out on Flynn Creek Circus. Hopefully, next year they will be back to their fabulous selves.

A YEAR AGO: Cider tasting in an heirloom orchard, and other pleasures in the Valley.

FIVE YEARS AGO: An intruder.

TEN YEARS AGO: So freakin’ glad to be home!

TWENTY YEARS AGO: On the dynamics of lines. 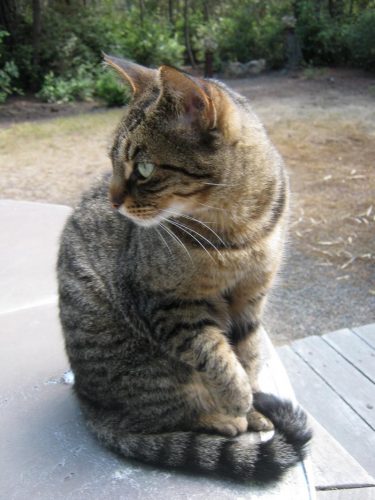 The Imperious Empress Audrey turned 15 on July 2. It’s hard to believe it’s been that long since she was a little kitten. I am happy to say that she remains healthy, sassy, and grumpy. She has not mellowed with age, resolutely remaining her pre-reformation Grinchy self, a trait she shared with her beautiful mother, Quince.

I use the past tense because Quince died this month, staying true to herself to the end and choosing her own exit. I hope her journey was peaceful and I am glad that Quince lives on in Audrey. My heart aches for my dear friend Pea, now all alone in her little Victorian cottage in the big city.

July is a catty month. My lovely niece Cat turned 40 (!) on the same day Audrey turned 15, and July 9 marked the 40th anniversary of my beloved Buddy’s birth. It was love at first sight for me when he was born, and it was a privilege to be there for his first breath and his last.

Cat celebrated her birthday with a lovely trip to Sydney and other wonderful locations in Australia, where she has now lived for many years with her guy Dave, who is Australian. She is happy there and is currently fostering a cat called Calvin. A Cat should always have a cat, even temporarily.

A YEAR AGO: Having a wonderful time at the circus.

TEN YEARS AGO: Getting ready to travel to Detroit to testify in front of a Grand Jury.

TWENTY YEARS AGO: Musing about mechanics and my Mustang.