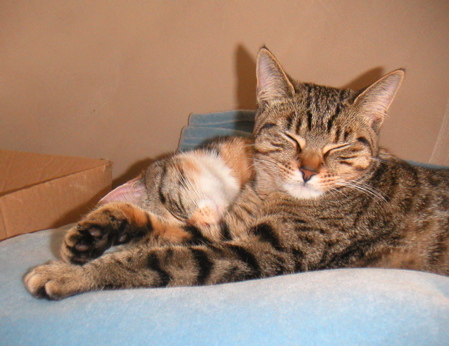 Sleepy Audrey (June in the background)

June has an uncanny ability to know that it’s near feeding time, both morning and evening. She never minds bringing it to my attention, either. She knows how busy I can get and how easily things can slip what passes for my mind. It’s a courtesy, really.

Audrey, on the other hand, is pretty much oblivious. She’ll join in the getting in the way fest that precedes my getting the food out of the cupboard and then its container and then into the dishes – sometimes. Often, I have to carry her squirming into the kitchen and put her in front of her bowl, where she looks up at me quizzically. I explain to her that it’s time to eat and eventually she figures it out.

You can see why I’m a little concerned about her wilderness survival skills.

The other day, I was cleaning up the water which June had hockey pucked all over the kitchen floor, and moved Audrey’s half-full (or half-empty, to the pessimists among us) dish to the living room, to get it out of the way during Operation Clean Up.

To my surprise, Audrey immediately started eating the leftovers while I mopped. As an experiment (this is as far as I go in inheriting my Dad’s science gene), I put Audrey’s bowl other places after she abandoned it, like the porch, with the same result. I can’t explain it, though. Maybe I can get a government grant to help me figure it out. In the meantime, it remains a mystery.
Nancy Drew, where are you when I need you?