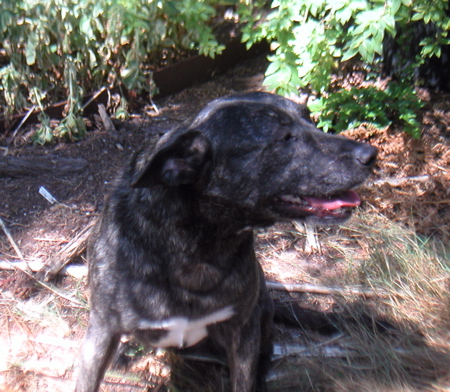 Gratuitous Schatzi picture, which has nothing to do with this post, except she’d be my neighbor if I move. And she looks so pretty!

Really, this alone should be enough to make me move, if the puppies weren’t. I found it fascinating, yet scary, and spent way too much time playing with it instead of working today. I was interested to note that my area seems to specialize in car thefts and burglaries, which makes me feel especially lucky that my neighbor B keeps an eye on my place on the rare occasions I’m away. She brought over my mail on Saturday (which included the September Issue of Vogue – yay!) and mentioned that I had left my car window open.

I need a nanny.

If I do move, the house I’ll live in has no locks at all. No worry about forgetting house keys! And most people up there leave their car keys in the ignition. So they know where they are.

I was going to take pictures for you, but the house wasn’t looking its best. The owners have removed the old balcony railings in order to replace them, so there’s a pile of old wood in front. Inside, the owners are still in the process of dealing with their late mother’s things, so it was a little on the disordered side, and it seemed disrespectful somehow to take pictures. It was so poignant to see Rose’s mail still on the coffee table, as if she’d be back anytime.

The room downstairs has a living space and a kitchen area. You can tell a guy built the house, since there are no closets and the kitchen* is almost an afterthought. I’ll have to be ruthless in getting rid of furniture and kitchen accessories. But the counter space isn’t much worse than my current kitchen, and there’s enough room for a table and chairs.

The stairs have a wonderful railing made from a single sinuous tree branch, and lead to the sleeping loft, which has a skylight and a door to the balcony. Outside, I discovered that the balcony wraps around to the side of the house. It’s big enough for a party up there.

There’s also an attached garage with sliding glass doors which Rose used as a pottery studio, and has plenty of room for storage. There’s also a washer and dryer, which is good, since the nearest laundromat is a half hour drive away.

Rose had the bathroom built on, so it’s new and nice. Also much better than dealing with an outhouse and an outdoor shower, which was the original arrangement. Again with the guy house, n’est-ce pas?

The house is heated with propane, so I won’t have to buy wood and chop it, which is great. All in all, I really like it, and all that really remains now is to negotiate the rent, since no-one has ever rented it before. Rose’s kids are having a memorial for her in a couple of weeks, so I’ll probably go up for that. Especially since they’re getting a mariachi band to perform. Now, that’s a funeral!

*I have to admit that I love watching those HGTV shows where people buy fabulous houses or renovate them. I’m always amazed by how, well, spoiled the people are. They always think kitchens that look perfectly fine to me need updating or aren’t big enough. Their heads would fall OFF if they saw Rose’s kitchen or my sister’s. Also, I can’t understand the obsession with stainless steel appliances, which show every single fingerprint, and granite countertops, which I find ugly. Also the need for two sinks in a bathroom. I don’t want anyone else in there while I’m getting ready, so why do you need two sinks?