In my delusional youth, I not only assumed I’d go to college, but that I’d go to grad school, because that’s what you did. Dad had enough letters after his name to fill a bowl of alphabet soup, and Mom had enough for a cup.

I did go to college, but it wasn’t the incredible intellectual awakening I had envisioned. Not only did I discover almost immediately that I had no idea how to study, having coasted effortlessly through school, merrily collecting A’s as I went (I remember getting a 98 on a Latin test in high school, and my mother asking me “What happened to the other two percent?”), but that the actual point of school is to teach you how to work within The System and to get you a job that actually makes money, no matter how irrelevant your degree may be.

Mine couldn’t have been more irrelevant. I ended up drifting into a degree in linguistics, possibly one of the most pointless degrees ever invented. I realized too late that all you can do with a linguistics degree is get another one, and you won’t get paid all that much more. I saw my life vanishing into a haze of ever more arcane semantics, with the horror of teaching when the haze cleared. I didn’t want to teach. For one thing, I hated school, and for another, I can’t stand most people. The last thing I wanted was a room full of people staring at me and expecting wisdom from someone as widsom-free as Me.

I ended up getting a job in finance, and I’ve worked in that field (or swamp) ever since. I have never had a job that had anything to do with my degree, but I bet they wouldn’t have hired me without one. The System, you see.

What my degree really did for me, or to me, is to make me irrationally irritated by people saying things like, “It’s between him and I” or “I could care less”, and spelling/grammar errors in books, magazines, and newspapers. Lately I have come to hate the following expressions:

Big-time: As in, “Barry Bonds is an asshole, big-time.” Or, “You owe me, big-time.” Yet I am unperturbed by “Suzy is a big-time spender.” Go figure.

Faithful readers may remember that Phil, the owner of Rita the Wonder Dog, fell in love last Fall. It’s been good news all around: Phil is now engaged, and I have become a part-time dog owner. Phil’s fianc&eacutee has two small children, who have yet to understand how to play with a dog of a certain age (or any dog). Oddly, dogs tend to dislike having their ears pulled, or being ridden like a horse. So do most people, in most circumstances.

So Phil quite often leaves Miss Rita with me while he tends to his other family. I have to admit to a certain indignation on Rita’s behalf, being that he kind of ditches her in favor of the new family, but I love her company and she does make me get some much-needed cardio. The canine timeshare has progressed to the point that I just keep a leash and a supply of Rita food on hand at all times, and she has her own bed beside mine.

On Valentine’s Day morning, I took her for a walk in the park. She is so well-behaved that I always let her off the leash. She soon met a big black dog with a curved tail, who bounded happily toward her. After the customary butt-sniffing niceties, they ran off to play together. The black dog’s owner was a handsome young man with bright blue eyes. He confided that the dog had followed him home the night before. The dog had no collar or tags, but he looked well-fed and was very sweet-natured.

The guy said the dog followed him all over his apartment that night. He called the Humane Society and Animal Control, and they both said that if no-one had called looking for the dog within three days, the dog was his. The guy said, “I only have a one bedroom apartment.” Pause. “And now it seems really small.” I said, “Well, it looks like you got yourself a dog.” He said, “I know”, and laughed.

Wouldn’t that make a perfect Meet Cute for a movie? 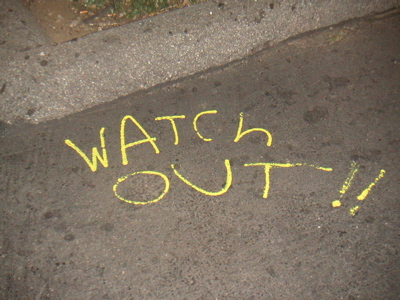 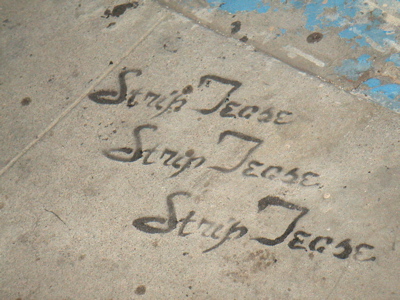 On Tuesday, I was still bored from the Stuporbowl on Sunday, even though I wasn’t in the same room with it. I had been assured that it would all be over at 9:00, but when the half time show started at 8:00, I began to have my suspicions. Next year, I’m going to hang out with K in her civilized antique house and drink wine and watch Gilmore Girls and pretend it isn’t happening. We might make a few prank calls to sports-watchin’ guys we know, but that’s as close as we’ll get.

To recover from the proximity-induced tedium, I went to have my hair highlighted. It was the first thing on my to-do list for the year, and voila! It’s done, even though it’s only February. I met up with K at the salon – she was getting preened to attend the freak show in Madison Square Garden next week, also known as The Westminster Kennel Club Dog Show as a reporter. To get an idea of the level of freakosity we’re talking about here, check out Best In Show.

As K and I, newly re-glamorized, left the salon, we noticed a fist fight in progress on the pavement. The fistfight was taking place in what appeared to be a pool of vomit. I’m not sure if it originated with one of the two contestants, or with one of the numerous spectators and/or casual participants, but we didn’t wait to find out who won or who was the one. As a police car turned the corner, we fled the scene.

I was third in line at the 99 Cent Store, where those who have lost their cred with creditors shop.

First in line was a guy who was buying six big bags of bird seed. Each bag was probably ten pounds. He paid with a $50 bill. When the cashier (the one and only in the whole store) scanned it to see if it was real, he started babbling about the scanning process, how you couldn’t trust anyone these days, how he once got paid for a job (unspecified) with a $1,000 bill…

The cashier, who was fortunate enough to have very little grasp of English, nodded and smiled politely, which only encouraged the birdseed buyer and discouraged the line lengthening behind him. Finally, having exhausted his topic and our patience, he left, presumably to feed thousands of birds or start a new diet craze (“Eat like a bird!”).

Second in line was a handsome young couple. They bought:

Behind me, I heard a guy on his cellphone ask, “Do you like Spaghetti-O’s?”

Now I was really scared.