On Friday, I wrapped up some work and some presents for Jessica and headed over to the family property for Jessica’s birthday BBQ.

It had been a while since I’d been over there, and things are rocking and rolling in the garden: 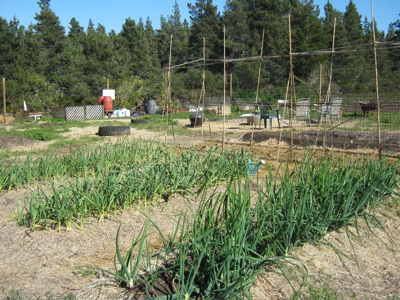 Those are onions and garlic in the foreground, with a new frame for peas and beans on the right – my sibs were discontented with the frames last year – and behind them, you can see the party palace, with the fire ring and grills. If you look really carefully in the background on the left, you’ll see the vats of compost tea, used to fertilize this produce extravaganza along with the adjacent orchard. I owe you a post on the orchard and garden developments so far this year.

It was a beautiful afternoon, but windy, as spring days often are here. Jonathan and Jessica used the golf cart to transport wood for the fire. it’s always good to have a real fireman show you how to make a fire: 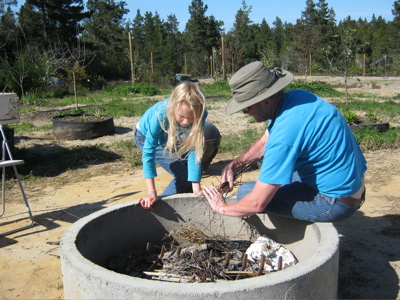 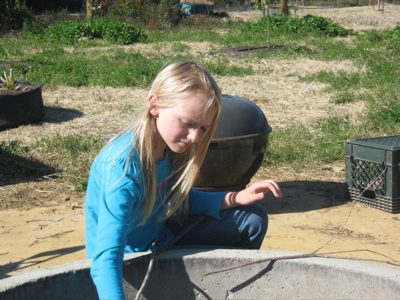 Megan had marinated a pork shoulder in lime juice and spices, and set it to cook slowly on the grill for several hours. It was removed to the oven to make room for Jonathan to grill onions and peppers. These were peeled and sliced and served up with the pork, black beans, and shredded cheese on tortillas for a delicious dinner. Lichen joined us and we had a great time.

When the grown-up talk got too boring for Jessica, she read (“Really, Memmin, have you ever known me to be without a book?”): 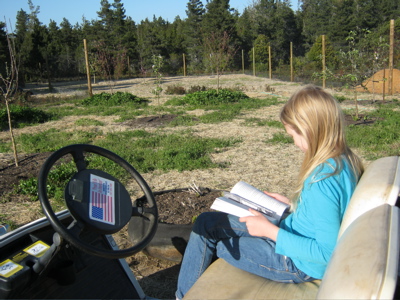 Her current read is called Graceling and it looks pretty interesting. According to school tests, Jessica is reading at a college level. Not bad for someone who just turned ten.

When we interrupted the reading, or tried to, Jessica said “Four more pages!”, usually without looking up. Erica explained that when she was a child, she asked her mother for something while her mother was reading, and her mother said, “Four more pages,” meaning that she would attend to Erica’s needs when she had finished her book. Eventually “Four more pages” got to mean, “Leave me alone, I’m reading,” regardless of the number of pages actually left, which is how the third generation of that family’s reading ladies uses it.

We were able to pull Jessica away from her book long enough to open her presents and have some cake. Megan bought the cake at a bakery, and it was chocolate with raspberry filling and buttercream frosting, with roses and “Happy Birthday Jessica” on it. Megan had even found candles whose flames burned the same color as the candles.

As for the presents, Megan gave Jessica a lemon clock kit (with lemon); a make it yourself bath bomb kit; and a book on totally irresponsible science experiments, along with a big box of Whoppers, Jessica’s favorite candy. I gave Jessica a pair of real, though tiny pearl stud earrings set in 14 karat gold. Jessica loved the book of experiments (and the Whoppers), and I think she would have been totally happy with just those. She is the least materialistic kid I have ever met.

Erica has done an amazing job over the past decade. I can’t wait to see what the next decade brings!