But it hasn’t all been divorce and (melo)drama. A couple of weeks ago, we had a lovely Friday evening.

Megan and I went to the Village to look for books for Jessica’s birthday, which, as every right-thinking person knows, is every April 15. Originally we were looking for books on Hindu mythology, but we struck out on that, so we headed across the street to Out of This World, which is. It didn’t take us long to snap up a make your own bath bomb kit, a book on science experiments, and, what every ten year old girl needs, a do it yourself lemon clock (lemon not included).

After that, it was time to take Star for a stroll and admire the ocean, which was feeling pretty that day: 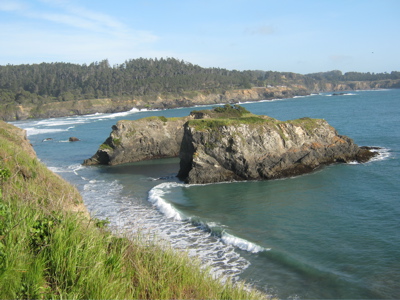 Star gets perturbed when I wander off and take pictures. She stops and looks for me, clearly thinking, “The pack should stay together at all times!” Once I rejoin the pack, she trots along happily, tail wagging and ears perked up. Star gets extra credit for totally ignoring the (many) barking dogs in cars. I finally understand why Megan trained her dogs to never, ever bark in the car. If only more dog owners did the same thing!

We met Rob for dinner at Frankie’s, where we sat outside with an ever-alert Star at our feet. And she was right – of course she got some dinner, too!

In the background, you can see the famous statue of Time and the Maiden on top of the bank: 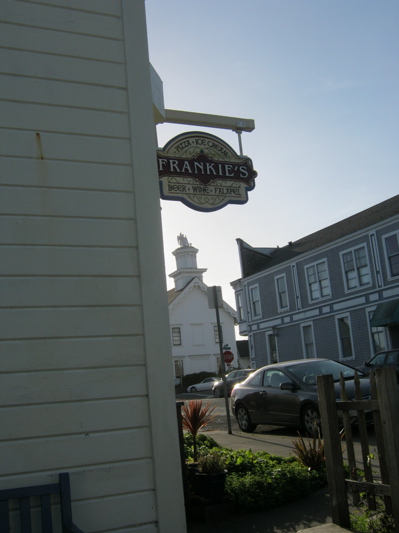 It was made in 1866 of a single truck of redwood and is one of the most famous and best-loved landmarks in the Village.

After dinner, we made our way to the theater, which was festively lit up for the occasion: 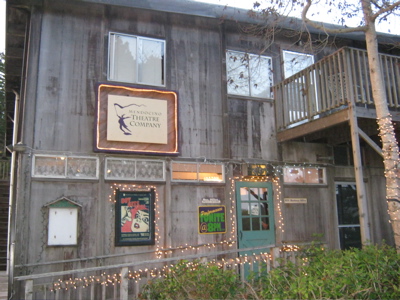 The play was called Boy Gets Girl, written by Rebecca Gilman in 2000, but set in New York in the 1990s. It’s a dark tale of a successful young journalist who is set up on a blind date with a man who seems to be innocuous at first, but soon becomes obsessive and terrifying.

Here’s the set when we first came in – it serves as the bar where the couple first meets, the journalist’s office, and her apartment: 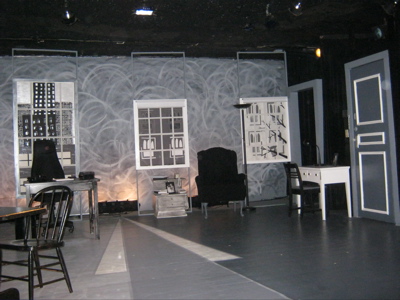 During the play, the journalist has to interview an aged filmmaker who specialized in B movies featuring voluptuous women and who continues to be, as the journalist puts it, “a breast buff”. The posters for his movies are pretty funny: 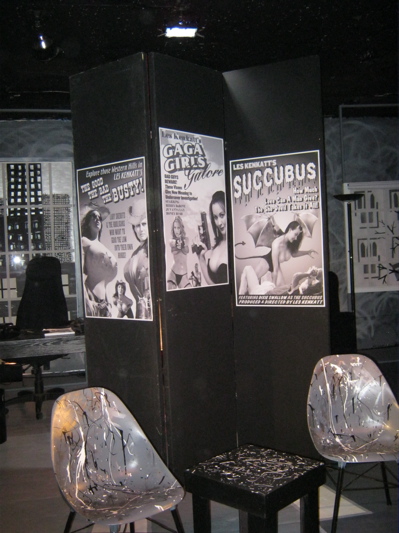 I was delighted to see one of the actors from Farragut North, which I saw last fall at the same theater. And one of the actors was the guy who owns the wine shop on Main Street. We all had a great time, and I think we’ll do it agin. Soon, I hope!