I’m back home in sunny Hooterville.

The kitties came running out to see me. Even Audrey the Grumposuarus wanted to be petted, and later crashed out on the top of the armoire as if relieved to no longer be in charge. I cuddled the boys – Audrey does not tolerate the indignity of such things – and they purred happily before running off to chase butterflies and climb around on the roof.

Boys will be boys.

I managed all of my ambitious itinerary except the museum. Yes, it’s lame to miss out on seeing a Vermeer, but Vermeer never imagined Bay Area rush hour traffic, so I chose getting out of town before the madness descended over immersing myself in art and beauty. Does this mean I’m finally a grown-up?

I waited in line at Swan Oyster Depot as per usual. It’s always worth it. I pulled up one of the few stools and ordered a half cracked crab (there must be some joke in there about how I’m half cracked and/or crabby, but I’m too tired to think of one) with sourdough bread. The bread is from Boudin’s (pronounced BO-deenz), but they bake it extra-long for Swan’s and the crust is dark and magnificent.

I love the ballet behind the counter. All of the servers are family, and it shows. Here you can see them in action: 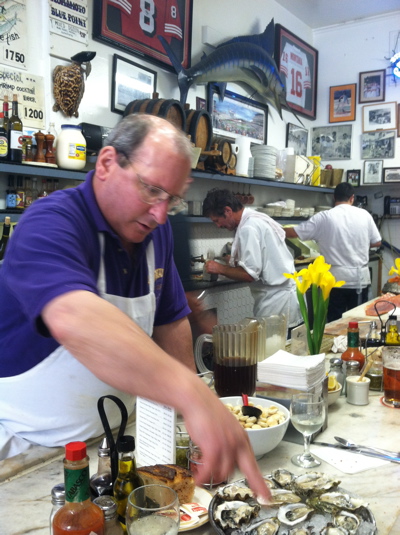 The gentleman in the foreground is explaining the various types of oysters. All the food there is sparkling fresh. The crab was heavenly. They even gave me a finger bowl afterwards, perhaps an unexpected refinement in a place with shared bowls of oyster crackers and lemon wedges.

When you’re done, you tell one of the brothers what you had, and depending on which one it is – not necessarily the one who served you – he either adds it up in his head or on a napkin, and then rings it up. You have to bring cash. It’s old school there.

After getting gas and picking up pizza and doughnuts, I went to Trader Joe at Hyde and California. It was delightful. Huge and uncrowded and like night and day compared to the madness of the Santa Rosa branch. Who would have thought? The clerk told me that they had been open for about four months, and I said it was a big improvement. She laughed and said. “Everyone says that!”

I made my way across the iconic Golden Gate Bridge, feeling a pang as always at leaving the place I lived in and love(d) for so long. Mount Tam loomed over the freeway as Marin county gave way to the rolling farmland of Sonoma county, and Sonoma to Mendocino. The happiness I feel when I cross the county line isn’t exactly the same as I used to feel when my plane swept over San Francisco preparing to land, but it’s good in a different way. And it’s good to be home.