I woke up before the alarm at 5:45 am and made some bad in room coffee, then repaired back to bed to read my fan mail and gradually come to terms with the horrors of waking up.

Eventually, I got in the shower, armed with Lush soap (Carmen Miranda) and fancy shampoo (Frederik Fekkai). I enjoyed having to actually add cold water because the hot water was hot. Not to mention no bugs or drafty window in the shower.

I enjoyed having lots of towels and a warm bathroom, applying makeup with abandon, until it was time to blow dry my hair. The dryer didn’t work, and it was applied to the wall, so I couldn’t try it in another outlet (my appliance version of restarting the computer). I shoved my feet into my heels and clopped over to the office to ask for a new hairdryer.

Alas, they didn’t have one, so I had to go to the conference and meetings with wet hair, which dried in the cab. Sort of. I had to put my faith in Angelika’s haircut and hope for the best.

On the bright side, I discovered that what used to be Cala Foods, where I used to buy my groceries when I lived here, is now a Trader Joe! So I can stop in there after getting pizzas for Megan and me from Victor’s instead of having to stop in Santa Rosa on the way home. Score!

At the Four Seasons, I enjoyed the attentions of the doorman and the view as always: 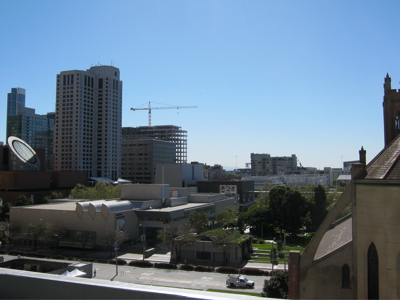 The conference was more crowded than I’d ever seen it, and I had to perch on a chair near the back without benefit of a table, which made it challenging to take notes. Not for the first time, I couldn’t help noticing that it was a very predominantly older white male audience. Finance seems to be an old boys’ network, at least in this town.

I had a couple of meetings after the conference, and as I sashayed down Market Street (San Francisco’s Main Street), I realized that I had forgotten to put on socks, since my feet began to blister. After the meetings, I limped to the St. Francis Hotel and was kindly handed into a welcome taxi by their doorman. Did I ever mention how much I love doormen and taxis?

Back at the modest motel, I kicked off the shoes from hell and tried to order Chinese food on line, which failed. I ended up calling them – old school, I know – and making a drink while watching the Giants game. Megan texted me that the kitties are in and fed, and tomorrow is another day.