It wasn’t all storms last weekend, though.

On Friday, I did an extra shift at the jobette to finish up a project. I finished about half an hour later than I expected, crushing my grandiose dreams of stopping at the nursery for more ground cover. I had an appointment with the wonderful Angelika that afternoon to get my highlights refreshed, so I called her to tell her I was running late and got there as soon as I could.

I love Angelika’s little salon in the woods. Everything smelled like lavender and all the rush went out of me as she “painted” my hair two different colors (she literally painted some of it with a brush) and put it in paper to process. She deep conditioned it when it was done, and even waxed my eyebrows. We chatted and caught up on each other’s lives, and before I knew it, it was almost 5:30!

The next morning, Rob called me around 8:30 to ask me if I was ready to go to our 10:00 swim class. Since I was still in my PJs, the answer was “no”. His plan, unbeknownst to me, was to go to the Gro for smokes, then the grocery store in the Village for a travel mug, his having disappreared, and then the coffee shop for coffee to put in the mug. I threw some clothes on, petted the kitties, and raced out the door.

We accomplished all the java-related chores before hitting the pool (on time) for the last lesson of the series. They start again in two weeks. Then Rob dropped me off at the jobette.

Megan met me there a couple of hours before we closed, and she did a great job of helping me when there were several visitors at once. In fact, our Chairman and his wife were completely charmed by her before they knew she was my sister. And speaking of charming: a visitor from San Francisco gave me the ring off her finger!

I admired it in passing while answering her question, and she gave it to me to try it on. Then she wouldn’t take it back*. It’s from SF MOMA and I am wearing it right now, the sun slanting through the colorful stripes: 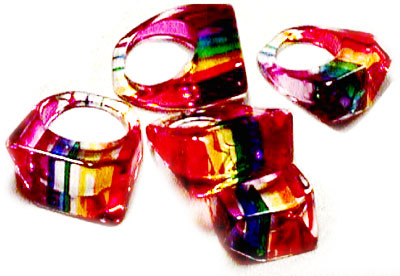 It looks great with my sparkly gel manicure.

The benevolent visitor also wrote a Haiku in celebration of First Friday. Every month, we have a different theme, and this month it was Haiku. Our County seat, Ukiah, is Haiku spelled backwards, so they have a festival every year. We joined in with ikebana, an ikebana demonstration, and do it yourself Haiku.

The arrangements were beautiful.

Gathering light
One swell of the sea
Becomes another 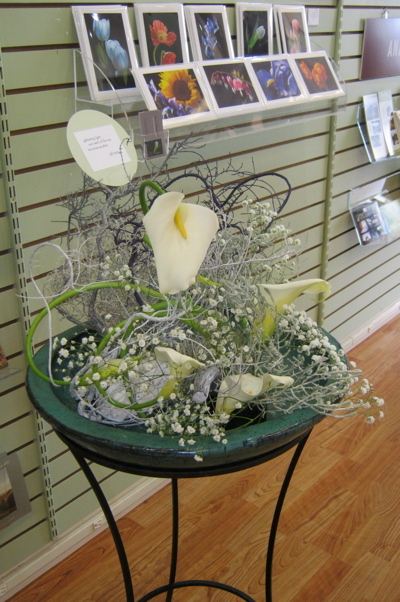 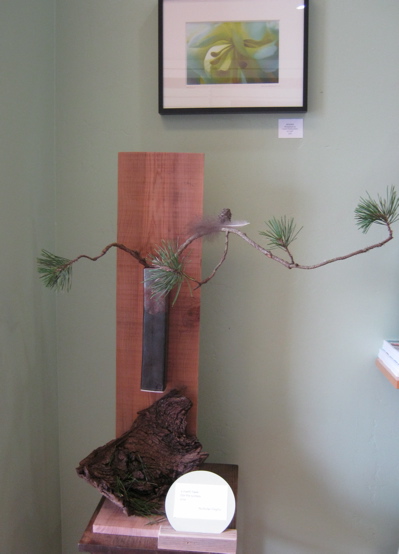 Parducci winery poured that night, and this arrangement cleverly incorporated their wine bottles: 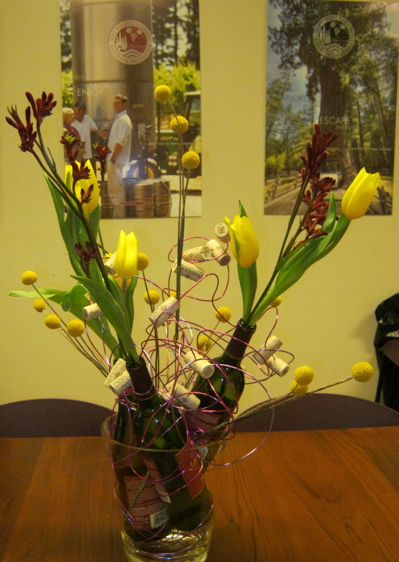 This one was still in our conference room when I took the picture. I love the vase: 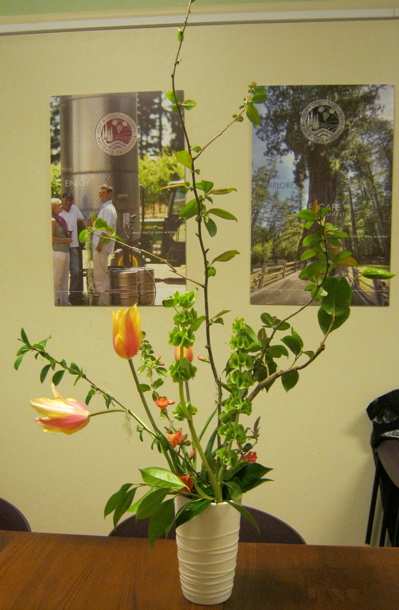 Having Megan there made it so much more fun, too.

*Megan told me later that she almost told her that she liked the bracelet she was wearing – leather with mother of pearl buttons – but was afraid the generous visitor would give that away, too!