On Sunday, I woke up to the sound of birds singing and the ocean pounding against the rocks and cliffs.

I drove homeward through the same striking scenery, really pleased that I had taken the time to explore a different part of the County. I stopped in the town of Elk (population 200 or so, and originally named Greenwood, after the founders of the town, whose father was one of the rescuers of the ill-fated Donner Party) and bought a newspaper in the little local store: 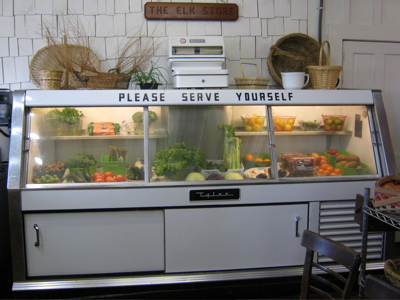 The one person serving was busy with other customers, so I left the money on the wooden counter and told him as I was leavng. He saluted and thanked me while making a sandwich.

I took the paper with me to Queenie’s Roadhouse: 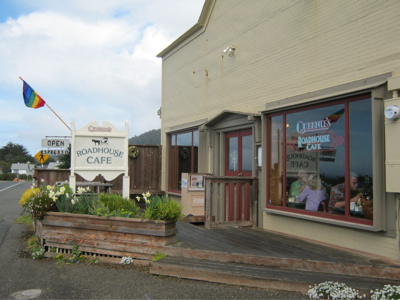 It had been years since I had been there. It used to be that they were open irregularly, so it was wise to call first and make sure they were open before making the drive. Now they are open from 8:30 to 3:00 every day but Tuesday and Wednesday.

It’s still wise to bring the paper with you. There is no cell service or wifi there, and since every order is made from scratch with organic and/or local ingredients, it’s not fast food. It gives you time to enjoy the lovely view: 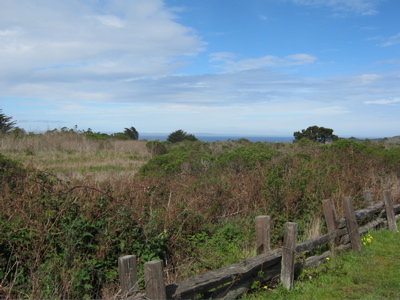 Replete, I set off for home, noting that it took a mere 20 minutes to get to Hooterville. I will be back soon!