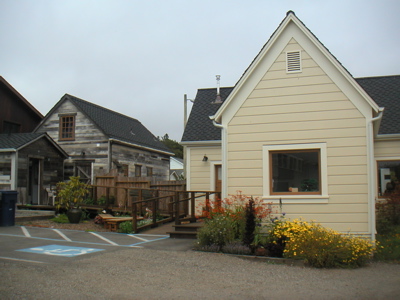 Back view of the vet office

On our way to the vet’s office, I observed to Megan that it seemed early for the Naked Ladies by the side of the road to be in bloom. “They don’t usually bloom until fall,” I said.

I was a little concerned that the kittens would react to the car trip to the vet in the same way they did to the car trip home, and about halfway there, it became obvious that my fears were well-founded. Inspecting the carrier after we arrived, it appeared that there was no damage to the kittens, and only minor damage to the towel inside, which was quickly disposed of by the cheerful technician, Cathy, and inspected by the kittens:

Dr. Karen was amazed by how identical they are. I have to admit I often have a hard time telling them apart. The main difference is Clyde’s bow tie (vs. Roscoe’s dash of white). It turns out that the roof of Roscoe’s mouth is adorably polka dotted and Clyde’s isn’t, but that’s not a lot of help at a distance. They even weigh the same: 3.3 pounds. 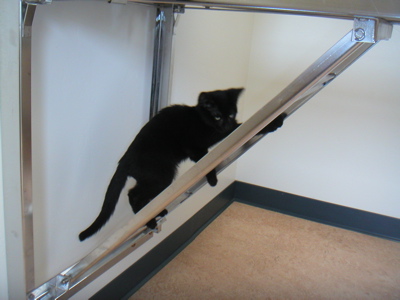 I was really proud of how good they were. Dr. Karen said they were exceptionally happy and well-adjusted kittens. And yes, their purrs are in fact very, very loud.

It was great having Megan there to hold the kittens and help with the shots, temperature taking, etc. It’s always good to bring along your own EMT to any medical appointment.

The boys took a nap while we wrapped things up with Dr. Karen (she had finally found time to use the massage gift certificate we gave her when she opened the office and loved it): 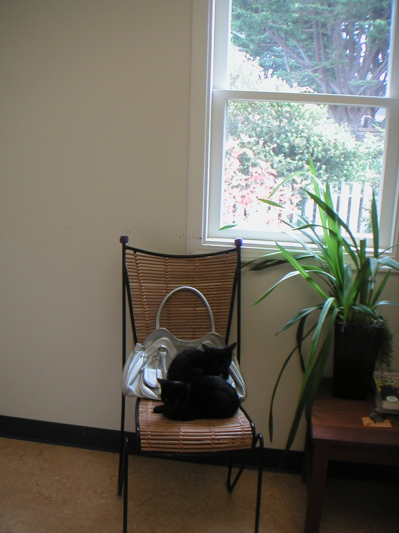 We’ll be back in a couple of weeks for the next set of the shots. Apparently the entire vaccination process goes on for quite a while, so I’m supposed to keep them inside for the next three months. Can she do it?