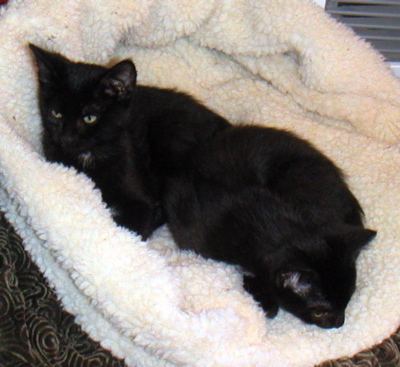 Well, the Evil Eighteenth was harder for me this year than it has been in a while. Grief is a strange thing. It can be nine years since you lost someone, and you can feel just as terrible as when you first got the news.

It’s probably because I lost both Henry Etta and June over such a short period of time this year, and my emotions were pretty raw. June’s death was as senseless and sudden as Dad’s was, and I think it reawakened a lot of those feelings.

It took some time to work through them. Fortunately, work has been very busy lately, which is great, since it occupies the surface of my mind (and in my case, surface is pretty much all there is) and helped me get through the days.

While I was busy working, the local Animal Care and Control was busy shutting down. In their infinite wisdom, the authorities decided to move everything to the county seat, a two hour drive away, for those who have a car. That means there’s no-one here to take care of lost or stray animals, or to deal with animal cruelty cases. Not to mention the loss of local jobs.

With the closure of the ACC shelter, the remaining Humane Society shelter was overwhelmed. They had more kittens than they knew what to do with, and I thought Audrey might like some company, so I went to see them with the intention of window-shopping. But I was taken with two little black kittens, who snuggled under my chin and purred so loudly that I thought the neighbors might complain.

The shelter worker told me that no-one wanted the black kittens, so they were two for the price of one. One of the kittens jammed his purring nose into my ear, and I knew I had two new family members.

As I filled out the paperwork, the kittens’ mother was being adopted! The shelter workers said that she was a wonderful mother, and that the kittens were the happiest and most affectionate they could remember having.

It soon became apparent that they shared Audrey’s distaste (and mine, for that matter) for traveling by car, and used the same method of expressing it. As soon as I got them home, I had to bathe them in the sink and apply Nature’s Miracle to the car’s upholstery. I might have to burn the carrier they came in.

Amazingly, they purred through the baths and were notably less upset by their sudden wetness than they were by the car ride. Here you see one of them asleep in the towel: 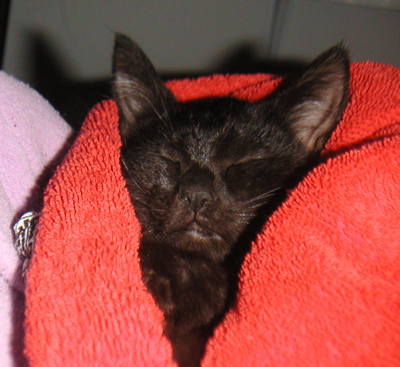 Audrey was not impressed with her bargain basement roommates. Here you see her giving them the stink eye:

Also, she is now making up for all the hissing and growling she didn’t do when Henry Etta moved in. But June and Audrey have always been great at adapting to circumstances, and they’ve been through so much in their lives, so I’m hoping that in time, she’ll accept them and maybe even like them. In the meantime, she can teach them how to be a wonderful cat.

By the way: I’m open to suggestions for names for these little boys!