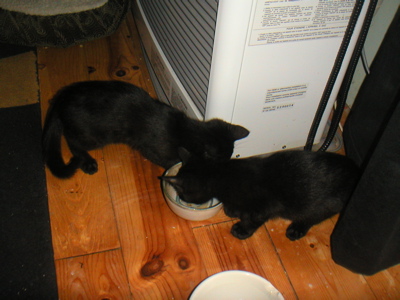 Audrey started demanding to go out at about 4:30. Despite the earplugs, it was almost impossible to ignore her clawing at the door, especially since it was accompanied by howling. Now with extra noise! There was no way I was letting her out in the darkness, especially since my brother’s cat, Twilley, has twice been chased home by a bobcat. My brother’s gun was loaded, but he didn’t get a clear shot, so the bobcat(s) are still out there somewhere.

As if the howling and clawing weren’t enough, the rowdies decided to play/fight all over me, with breaks for chewing on my hands. No matter how many times I pushed them off me, they boomeranged back. Those boys walk all over me – literally. When one of them clawed my lip, I gave up and got up.

After I stopped it from bleeding and retreated to the couch to drink coffee and read my email, they both curled up on my chest, purring and trying to chew my glasses. It made it pretty much impossible to do anything, including writing my near-daily postcards from the depths of obscurity.

I am continuing with my policy of not feeding them when I first get dragged out of bed – especially when it’s due to their naughtiness – so when Audrey slinked home around 8:00, I was almost psychologically prepared for the feeding time fiasco. Almost.

Unfortunately, the boys have figured out that the food is in the pantry. So every time I go there, they immediately stampede underfoot to try and beat me to it. You can imagine how enjoyable this is when making dinner, calling for several pantry trips, or laundry.

Audrey was also there, so they fought and growled and got underfoot. I put Audrey’s food in her dish, and put them both on top of the washer. Audrey hates being picked up* in front of the kittens. She must think it’s undignified.

Then I got the kittens’ food and put it in their dishes, which are currently adding to my living room’s décor, along with the litter box. They came running, and immediately started eating out of the same dish (see above), which is what they always do. They jam their faces into it, then realize they don’t fit, and start taking turns, completely ignoring the other dish until I pick one of them up and put him in front of it.

Then they rush back to the pantry to try and scam some of Audrey’s food. Audrey is far too ladylike to bolt her food, so she always leaves some and comes back to nibble on it later.

Can you imagine what feeding time will be like when they’re big enough to jump up on the washer?

*Actually, she never likes being picked up, even at the best of times. Maybe it’s always beneath her dignity.