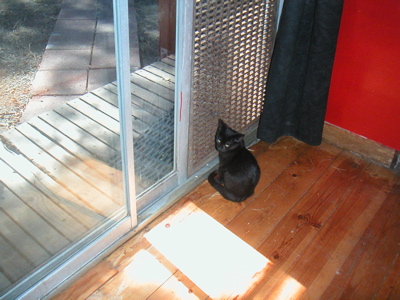 Yikes. Audrey woke me up around 6:00 this morning, making a really scary howling noise (not to be mistaken for her “get lost, boys” growl, which I am hearing right now as I type this). I came downstairs and found her in front of the sliding glass doors in the living room, her fur and tail all puffed out.

I turned on the outside light, but couldn’t see anything out there, so I went out to see for myself. I expected at least a raccoon, but nothing. In the back of my mind, I hoped it would be June Bug and Audrey was trying to alert me to her return in a cinematic fashion, but once again, real life turned out to be disappointingly unlike the movies.

The boys were concerned (or curious), and kept approaching her, despite the constant rebuffs. Audrey was determined to go out, and I was determined to keep her in, even though her fur had deflated by this time.

I know it’s slightly irrational, and mountain lions and other predators don’t punch their time cards and clock out at 6:30, but I have to wait until it’s fairly light outside before I allow Audrey out.

Imagine how much fun it’s going to be keeping three of them in the house all night.

It’s already bad enough keeping the boys in during the day. About two days after their adoption and baptisms, the weather abruptly changed from silvery and cool to sunny and hot. Most people have been referring to this summer as “the summer that never was”, whereas to me it’s been close to an ideal summer, not least because it has kept the wildfires down and my brother out of danger.

One of the many eccentricities of James’s eccentric architectural style is the almost complete lack of windows that actually open. In my house, the only one that opens is in the shower, where, you know, you don’t really need it, especially in winter. The windows in Megan’s house and Jonathan’s former abode don’t open at all. To get any ventilation in our houses, we have to leave the doors open, which is not conducive to keeping cats in. So while I have six doors in the house, I couldn’t open them. Water, water everywhere, but nary a drop to drink!

Needless to say, it was Rob to the rescue.

He came over bearing a wooden baby gate, which he placed in the balcony door, facing west. A couple of minutes later, he appeared at the sliding glass doors of the living room (facing east), and put a metal grid in it (see above). The metal grid used to be outside the pantry door, to scrape boots on in the winter, but it makes a great screen. He then got a ladder and turned the switch on the ceiling fan so it supposedly cools the air*. He found the baby gate at the dump, so everything was free! Also, I hadn’t said a word to him about it, but I guess it all comes of his knowing me for most of his life.

*I can’t tell the difference, but I also couldn’t tell that it drew the warm air up in the winter, so maybe it’s Me. Where there’s no sense, there’s no feeling, as my grandmother used to say.