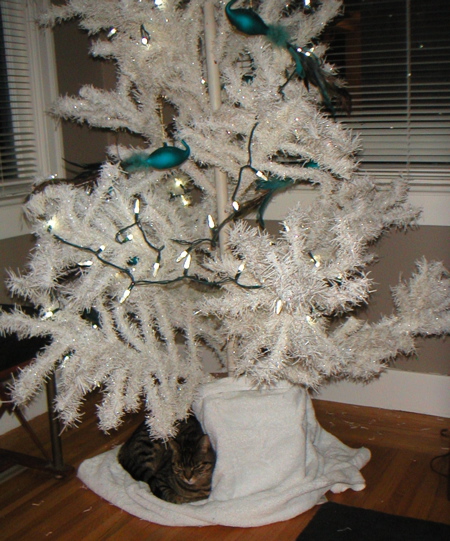 The calm before the storm

It turns out that getting tree and Self out of the creepy crawlspace relatively undamaged was the easy part of the process.

In addition to forgetting how challenging it is for the challenged to put the branches in the slots, I had also forgotten that I don’t have a tree stand. The tree is about half a century old (it was originally priced at $2.88, according to the sticker on the box), and is too thin (if not too rich) for modern tree stands. So every year, I prop it up with bricks, and promptly forget about it until the next year.

Not only was I trying to hold it up and together (the trunk has two pieces, top and bottom, which screw together), I was trying to hold out against the kittens, who were trying to help.

They were only five months old last Christmas, and I was too traumatized by the move to bother decorating, so this is the first Christmas tree they have ever seen. Naturally, they assumed that I had put it up for their amusement, which is the only reason I do anything. Imagine their delight when the fabulous peacock ornaments, bought way back in August*, made their stunning début. Now, there’s a toy they could really enjoy!

My original plan was to add some clear and frosted white balls to the tree, but after the constant assaults on the peacocks, I gave up, even while regretting resisting buying that iridescent garland at the peacock ornament shop and thinking about those really small candy canes I saw at Safeway. Hey, a girl can dream!

After an evening spent squirting the cats with water, yelling, and swearing instead of sitting glamorously by my beautifully decorated tree, I shut the cats in the laundry room and removed the peacocks from the tree. Unfortunately, I had had some kind of efficiency psychotic episode after decorating the tree and had already returned both the tree box and the peacock box to the depths under the house. There was no way I was going to drag up the dusty boards on the porch and crawl under the house again. So I put the ornaments in a different box and put it in the closet.

I reckoned without the kittens’ ingeniousness when it comes to naughtiness and the fact that few doors in this house close properly, since I found them merrily batting around the elegant toy birds in the morning. The box of birds has now been moved to the top of a closet with a door that actually closes (and stays closed), and the tree has a certain minimalist chic with just white LED lights on its white branches. Which June thinks are chew toys.

*Though I only just started writing Christmas cards!

2 thoughts on “Tree or Treat”