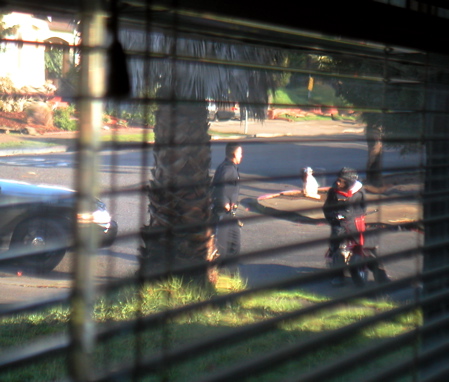 …was right outside my window. I was getting ready to go and visit Henry in his new and improved quarters on the back porch when I heard the siren. It stopped right outside my house, as you can see from the photo above.

Neither rain nor hail nor policemen can keep me from my appointed task, so I put on my coat and went out the front door. I no longer go out the back door when feeding Henry, since it scares him and he runs away. When I approach from the porch door, he either comes to meet me or stays on his couch and mews while I fill his dishes and talk to him about nothing.

Going out the front door also gave me an opportunity to see what all the fuss was about. One cop was handcuffing the guy, who seemed to be perched on a kid’s bike, and the other was doing something in the car. The cold morning air was full of incomprehensible radio sounds. I can’t imagine what kind of law you can be breaking, or trying to escape from, on a kiddie bike, but there you have it.

When my sister was briefly here last week, she said that she pretty much expected to see Henry in the house one of these days. I laughed this off, but she pointed out that first he was roaming around in the backyard, then he was under the porch, then he was on the porch. Clearly he was moving closer all the time. And that’s not even mentioning the bed and tent I have acquired for him, and accessorizing the couch on the porch with a fleece blanket. This morning, I attempted to cover him up and was rewarded with a couple of impressive scratches. Ah, gratitude!

I have to admit that the other day I had the back door open and he was peering through the screen door and talking away. I couldn’t help thinking about opening the door and letting him in, though I imagine carnage would ensue and The Beautiful June Bug’s little pink nose would be put severely out of joint. And I don’t see how I could let him out while keeping the girls inside…

My sister may, as usual, be right.