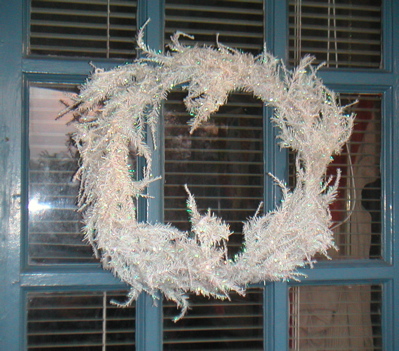 I could use an elf or two. Any volunteers?

I thought today would be a good day to put up the Christmas tree. I ventured into the creepy crawl space* under the house, found the battered old Gimbels box, and hastened up the stairs, convinced that mice and spiders were pursuing me. Since the crawl space was apparently made for midgets, I managed to bump my head on the way out, probably losing valuable brain cells in the process.

I could have used them, because setting the tree up was more challenging than I remembered. It’s an artificial one, painted white with branches that are inserted/screwed into the trunk. It’s harder than you’d think to hold it up and put the branches in, especially with the kittens “helping”. You can hardly blame them, since it’s the first Christmas tree they’ve ever seen (and maybe their last). I had envisioned the tree twinkling and the candles in the fireplace shining while I sipped wine and listened to the soundtrack from “A Charlie Brown Christmas”, but so far, it looks like only the wine part is going to come true tonight.

On the other hand, I do have my coordinating wreath up.

*California houses rarely, if ever, have basements.