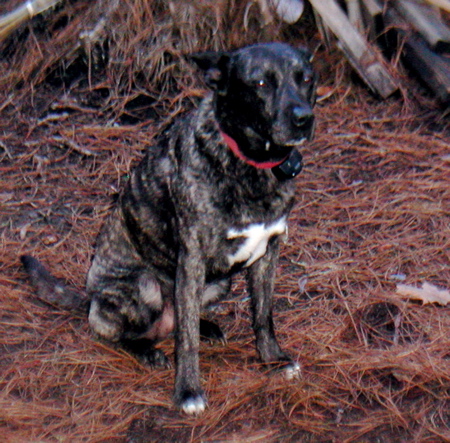 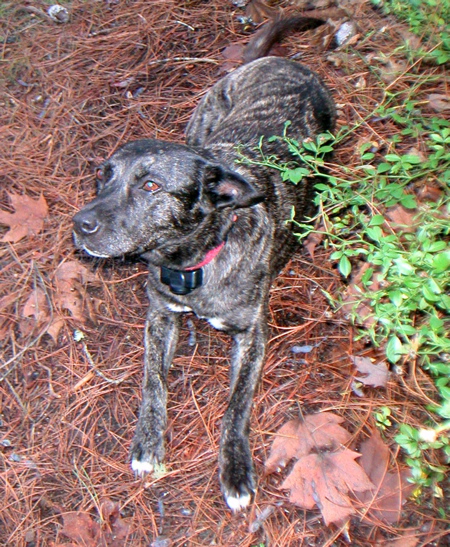 Joy asked for more Schatzi photos, so here they are. Again, I apologize for the complete lack of skill on the part of the photographer. You can see the adorable star on her chest, her French manicure with the white tips on her paws, and the affectionate look in her eyes. She’s a brindled pit bull, though they come in many colors and sizes. She’s a ladylike 34 pounds! 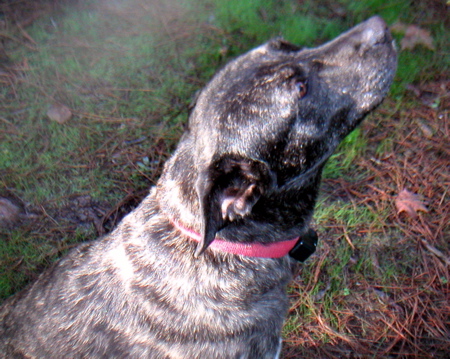 Schatzi, with the sun on her fur and love in her eyes.

My sister pointed out that there have been, to date, no pictures of her beloved dog, Schatzi, on my blog. I endeavored to redress this egregious wrong by taking some pictures at Thanksgiving, but, alas, the sun was too sunny and the photographer too inept to give Schatzi her considerable due.

In this picture, she is looking up at my sister, and I think it’s pretty clear that there is love in those big brown eyes. The whitish thing in the background is either the glare of the sun or a ghost passing through in a hurry – you decide. I wish I had taken a better picture, since she really is a beautiful dog.

Those who are not Germanically inclined may wonder about her name. It’s only fair to say that our mother had the worst taste in pet names (and men, but that’s another story). Her cat L’il Bit and dog Baroness von Hershee (known by the slightly less embarrassing diminutive “Bear”) spring to mind. Anyway, Schatzi means “treasure” or “sweetheart”, and she is both.

Mom was walking the unfortunately named Bear one fine day, when she heard a noise coming from inside a Dumpster. Peering inside, she saw an emaciated young pit bull, whimpering for help. Mom flagged down a couple of passing guys, who hauled her treasure out of the trash. Mom cleaned her up and brought her to the local shelter. On being told that the dog would be euthanized immediately for the capital crime of being born a pit bull, Mom of course turned around and took her home.

Although Schatzi had been through things far too terrible to relate here, she is, true to her name, a total sweetheart. I can tell you this from personal experience, when I had her stay with me for a month while Mom was away. Eventually, Mom and her dogs moved in with my sister, and time has now left Schatzi in charge. She and my sister are devoted to each other, and there could be no happier ending for the little dog who went from being one man’s trash to one girl’s treasure.