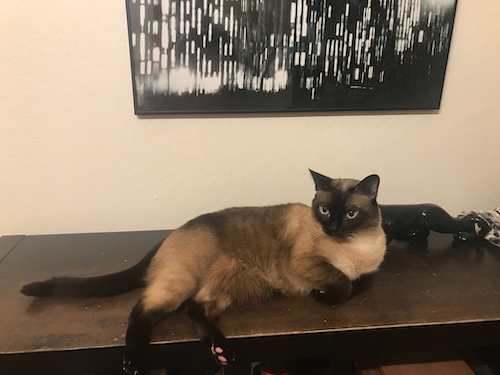 When I went downstairs on last day of the year, I was happy to see the light and sparkle of the Christmas tree, but surprised not to see Dodge. He is always interested in getting his spoonful of wet cat food, whereas Clyde, careless of the drought, is interested in drinking from the tap and Audrey, who disdains us all, doesn’t bother to come downstairs, knowing that she will get room service. She has trained me well.

I didn’t see him anywhere. I peeked into the Closet of Doom, where, terrible cat parent that I am, I have accidentally shut in the cats from time to time, and he was conspicuous by his absence. I finally opened the door to the back porch, and Dodge shot into the house like he had been shot from a cannon. He was up the stairs before I was really sure what had happened. He was a cartoon-esque blur.

Somehow, he had sneaked past me at some point and then spent the whole night outside in the dark with the monsters. He is aptly named, our Artful Dodger*, dodging past me even when I’m looking for him to do it. He is a habitual sneakyboots. Lately he has had an insatiable lust for going outside, even though the weather could hardly be less appealing. I have no idea why this is, but in the battle of wills between me and this small Siamese cat, I am rarely the winner. I only let him out in the daytime when I’m home, or at least that’s the only time I knowingly let him out.

I have already begun to try and steel myself against the possibility of his not coming home, like the beloved Roscoe. But I think, if I could tell Dodge or Roscoe that if they stayed in the house, they would be safe, but going outside is fraught with dangers up to and including death, they would still choose to go out. They are both Adventure Boys. Sometimes I think that Roscoe died doing what he loved, and that he loved his time in the woods. I just hope the end was swift and merciful**. I still miss him every day.

Dodge eventually came downstairs for his breakfast, though he kept doing that bobblehead thing he did when I first adopted him and which he does when he is nervous, He kept looking at the back door. I expected him to stay home and sleep all day, but in his resilient, Dodge-like way, he was his old happy self before noon, and, yes, asking to go out again. Request denied.

*The same day I wrote this, I watched an episode of Perry Mason called “The Case of the Artful Dodger”.

**When I moved, I felt really sad about leaving him there alone, even though I had no idea where he was. I’m not known for my logic.

A YEAR AGO: My morning drive.

FIVE YEARS AGO: The saddest day of the year.

TWENTY YEARS AGO: Shopping in the neighborhood.