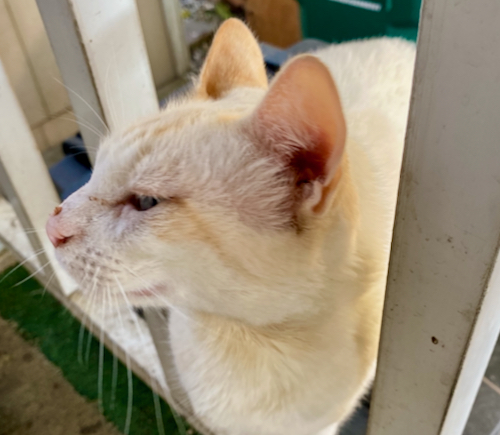 Faithful readers may remember how I fell in love from afar with a gorgeous, if pugnacious, flame point Siamese cat named Frank. Frank started hanging around John’s place, looking adorable and acting hungry, and of course John started taking care of him, as he does all the strays who cross his path.

I have enjoyed the Frank news, videos, and photos John sent me. Frank often showed up with scars and wounds, as befits a tough guy who is a street fighting man. John tended to the wounds, and eventually Frank warmed up enough to be petted. His territorial and fighty nature made it impossible for him to join John’s cat family, but as it turned out, John told me a couple of days ago that:

Frank is a goddamned con artist!

He eats an average of two cans of Fancy Feast every day. Those dinky little cans of fancy feast are the most expensive cat food I buy.

Frank’s real name is Olaf. His owner is a dude named Leo, who lives a few streets over. I just spent about 45 minutes chatting with the guy. He’s my age, lives in a mobile home with his daughter.

Frank — who will always be Frank to me — is inside safe and sound every single night. Leo said that Frank has some kind of a heart issue and he probably won’t live very long, but I’m not too sure about that because Frank is so robust. During a conversation I must’ve mentioned 20 different ways that he could create a really rich environment in his house to keep Frank indoors. And I specifically mentioned the times that I’ve been putting Neosporin on fight wounds that Frank has had.

Anyhow, I look forward to more visits from Frank and I will always feed him, but it is an unbelievable relief to know that he is microchipped, gets his annual shots, and is safe and warm at night.

Here’s Frank from yesterday, with my expensive food on his nose. (That’s the photo above)

He’ll always be Frank to me, too. Olaf is a pretty bad name. Knowing that Frank is a con artist only makes me love him more. It’s a total relief knowing he has a home and is cared for. I wonder how many other people are feeding him and thinking he’s a homeless waif?

A YEAR AGO: A magical encounter with a deer. I told a friend about it, and she said it was Dad checking in on me. I love that thought.

FIVE YEARS AGO: The horrors of the annual fundraiser.

TEN YEARS AGO: Storms, and some great dump scores.