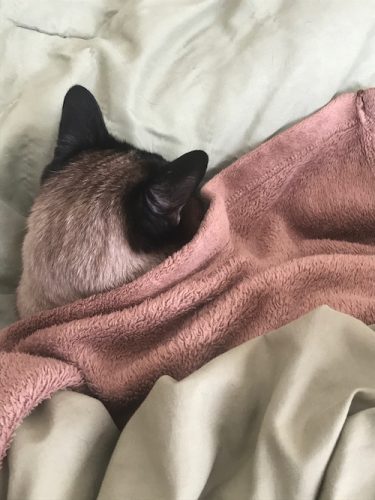 Dodge, the formerly stray cat from the mean streets of the Big Town, is a little sneakyboots. If he wants to go outside, he will lurk and plan and plot and find a way to escape from the Big House.

Usually, he makes a break for it during the daytime, when I am preoccupied with importing groceries or exporting compost. I have learned that there is absolutely no point in calling him or trying to catch him. He will come in when he’s good and ready, and not a second before. And when he does, he just strolls in casually, like he’s coming home from work or something.

Clyde is never casual about Dodge’s illicit excursions into the Wide World. He always sniffs Dodge all over carefully to ascertain where he has been and what he’s been doing, but Clyde himself is no longer interested in exploring the Unknown. Losing his brother Roscoe affected him profoundly, more than the near-death encounter with the Slobber Monster. I think Clyde either saw it happen or knows what happened to Roscoe. He definitely stays close to home.

One night, Dodge sneaked out into the darkness. I could not see him or stay awake, so I turned on all the outside lights and hoped for the best. I was rewarded by the sight of my wayward youngest cat sitting on the back porch in the early morning darkness the next day. He came inside and it was immediately clear that he was not his usual self.

Far from being the insouciant boulevardier he used to be, he was quiet and slow moving. He did not eat, and he sat like an uncomfortable loaf of bread instead of curling up on the heater or basking in the sun. I checked him all over for wounds or sore spots, but found none. I was beginning to fear that he had eaten something bad or even poisonous outside, especially when he started hiding under the bed.

I tried not to panic or worry, and my uncharacteristic patience was rewarded by Dodge slowly beginning to seem more like his old self, though, like Clyde, I don’t think he will ever be quite the same. Also like Clyde, I don’t know what happened out there, but it was enough to scare Dodge pretty badly. I noticed that some of the fur on top of his head had gone pure white, like Marie Antoinette’s hair was said to have gone white overnight, and the place where the Slobber Monster grabbed Clyde is pure white against his black fur. I guess it’s a reaction to trauma.

Whatever happened that night, Dodge has, at least temporarily, been unbounced. I’m just glad he’s safe.

A YEAR AGO: The beauty of spring.

FIVE YEARS AGO: A beautiful day in the Village.

TEN YEARS AGO: Getting contacts.

FIFTEEN YEARS AGO: My street must have had some interesting zoning laws. I imagine it is pretty much wall to wall condos now.