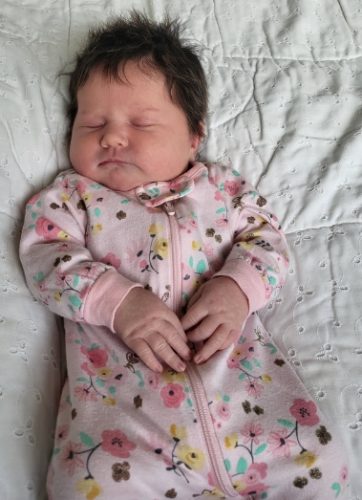 Babies are rare in our family. The most recent ones were born nearly 40 years ago, and they are showing no signs of reproducing themselves, so babies may well be extinct in our family. No wonder our family tree is more like a twig.

So it was extra exciting when our beloved Ben told us that he and his fiancée Erica were expecting a baby girl for Christmas.

As girls often are, this little lady was a little late, probably putting on some finishing touches for her debut, which coincided with the year’s debut. She arrived on New Year’s Day, sporting a full head of dramatic hair and capturing the hearts of her entire family. Here she is with her adoring father: 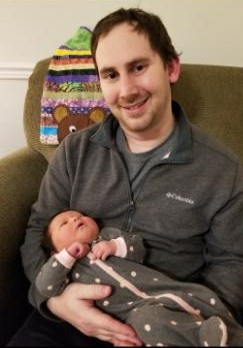 It took Ben and Erica a little while to choose the baby’s name. They wanted to get to know her a little first. They finally decided on Anna, in honor of Ben’s great aunts, one on his mother’s side and one on his father’s sides. These ladies meant a lot to Ben and had passed recently, the great-aunt on his paternal side at the amazing age of 102. It’s nice to know that she has a family name that is meaningful to her parents and hopefully will be to her as well. I like it that it’s classic and easily spelled and will not limit her possibilities in life.

Ben gets five weeks of paternity leave, and he loving being with Anna. He is already listening to music with her and enjoying every moment. I am so happy for all of them!

A YEAR AGO: The annual library meeting.

FIVE YEARS AGO: Cheers to the sunset, even though it was a school night.

TEN YEARS AGO: Why I’m here.

FIFTEEN YEARS AGO: My alphabet.

TWENTY YEARS AGO: My in-laws were planning their first visit to San Francisco.