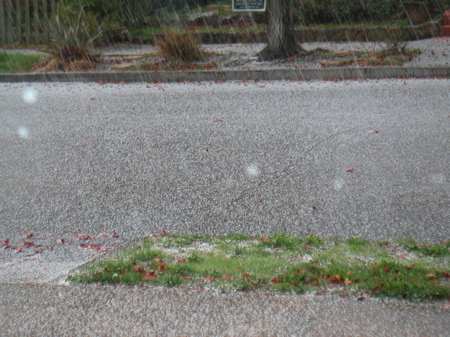 My street in today’s hailstorm

I may have jinxed the weather by posting those sunny pictures, because it’s been cold and rainy ever since. Some of you may think that it’s always warm and sunny here, but that’s the southern part of the state. The northern part can be (and is), as the late, great Frank Sinatra once said “cold and damp”, which is probably why his house was in Palm Springs.

So I’ve been bundled up like a Dickens waif, since the house is drafty and I’m too cheap to turn the heat up. Fingerless gloves are a definite possibility if the overnight lows really do reach the freezing mark (32F/0C) they’re predicting.

Yesterday, I propped the porch door open in case Henry wanted to shelter from the storm. It turns out he did, since he was curled up on the couch* there within minutes. The girls and I could keep an eye on him from my desk, though it makes it a little crowded with two cats, my iBook, and filing system** (precarious piles of things & stuff). Not to mention essential items like the paperweight with a reproduction of Marilyn Monroe’s driver’s license in it.

As the day grew darker and colder, it occurred to me to bring Henry a blanket. I figured I might as well bring some food and water while I was at it, so I did. He took one look at me and fled in horror. Though this is not an uncommon reaction, I would have thought that the months of taking care of him would have given me some extra credit, but apparently not.

Peeking through the window a few minutes later, I saw him snuggled peacefully in the blanket. I hope he was there all night. Every night when I lock the doors, I always think of him out there in the cold and dark, and it’s nice to think he’s closer and warmer.

Update, 1 pm: It’s hailing like crazy out there. I can’t remember this happening here before. I risked life and limb for you, dear readers, to take that picture. I slid around on my wet and icy front porch and peeked around the storm-tossed camellia to get photographic evidence. Just for you! My hair is still full of melting hail!

*When I was camping here a year ago, my boss took pity on me and lent me a futon couch which had been rejected by his youngest daughter. I’m guessing they don’t want it back. It’s nice to have on the porch, though.

**I could really use Miss Lemon’s invaluable services.