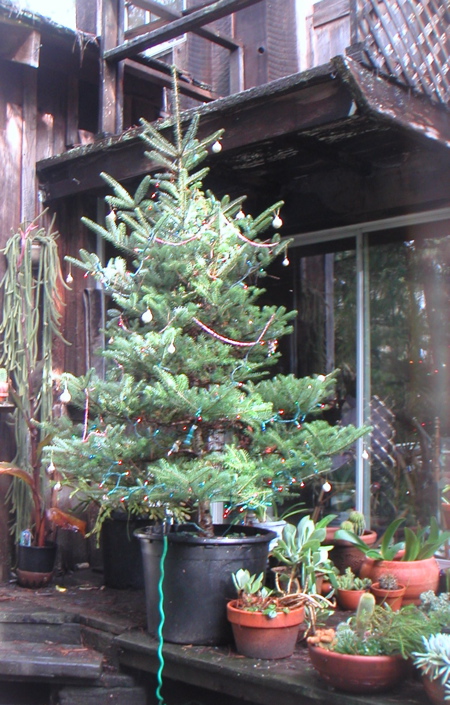 Seems the weather was terrible nearly everywhere in the country on Christmas Eve, and here was no exception. It was rainy and cold as I set off for my brother’s and sister’s. The traffic rivaled the weather for unrivaled awfulness. It took more than half an hour just to get to Berkeley, which should have been a ten-minute drive. If the cars weren’t sitting nearly still and gossiping about each other’s paint choices, they were merrily speeding by me, sending jets of temporarily blinding water over the windshield.

It took five and a half hours to go 150 miles. When I passed those normally irritating signs that tell you how much faster you’re going than the speed limit, they just reached out and patted my head as I went slowly by. Good girl!

I have never been so glad to see my sister’s little house in the pygmy woods.

My car crabbiness rapidly evaporated under the spell of the twinkling tree* and an open bottle of wine. By the time my sister got home from work, I was positively cheerful.

We had drawn names at Thanksgiving for stockings, and I had gotten my sister. You can imagine how much fun I had filling it. Because the tree is outside, we leaned all the stockings against the antique (yet working!) spinning wheel to await the big day.

While we arranged the stockings, my brother-in-law kept vanishing and reappearing. My sister finally asked him what he was up to, and he said something about a project he and my brother were working on. I smiled to myself, knowing full well what the “project” was.

Brother-in-Law had asked me to buy a replacement bathrobe for him to give my sister. Not because of the usual male inability to shop and shop on time, but because there’s nowhere to shop there and if he bought it online, my sister would see the package when she collected the mail. So I headed into the city on Tuesday with my mission firmly in mind.

All I can say is, if people are cutting back these days, they’re not cutting back on trips to San Francisco, or cable car rides when they get here ($5 one way). The line for the cable cars stretched around the block, tourists presumably blissfully unaware of all the cable car accidents this year.

So I fought my way through the maddening crowds and into the shop, where I discovered that the robes only came in white (impractical when your house is surrounded by dirt and doesn’t know enough to stay outside where it belongs), pale pink (ditto; also, she hates pink), baby blue (ick) and red. I figured red was the best choice, but it was sold out in her size. So I got the baby blue.

I told BIL, and he decided to get high quality dye and dye it a beautiful, rich blue. But he had to wait until I got there, much later than expected, on Christmas Eve, then wash it to remove the sizing, etc., then dye it, then wash it, then dry it. And the washer and dryer are at our brother’s place at the other end of the property, so it was quite a performance.

It was all worth it in the end, and she was delighted – even more when she knew the story. It made it more special, she said, to know it was a family project.

*The tree is a living one, and is now too big and heavy to drag into the house. Fortunately, it can be seen from most of the house through the sliding glass doors in the living room. I think it will be planted and a new tree chosen for next year.