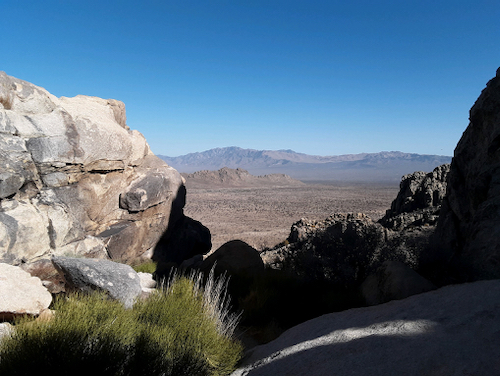 Jonathan and Rio’s adventures continue. For those of you who don’t know my brother, he is an avid ham radio operator, which comes into play in this installment.

After we packed up this morning we headed to a little place called Kelso. It is what is left of a train depot. During the steam train days locomotives pulling long trains couldn’t make it up the grade by themselves. So at Kelso they had “helper trains”, extra locomotives that helped the trains get to the top, then disconnected and went back down to Kelso to help the next train. Once powerful diesel locomotives were invented there was no reason for Kelso to exist and so it was mostly abandoned. There was also the remains of the Kelso jail, which at this point is just a cage. It used to have a tin roof and walls to keep the sun off the prisoners which is now gone.

Wait a minute, maybe I should explain about nets. Radio nets are a meeting on the air of ham radio operators. So this morning, when I checked into the RV service net and was listening to the other stations I heard there was another ham camping just a few miles from us! What are the odds? So, I made contact with him and he and I had a great conversation on the radio. Turns out he has been here many times and had much information about what roads are good, which are bad, interesting places to go, where you can get water and so on.

So, following some of his advice we headed up Cima Valley road. There we found a forest of Joshua trees, just as good as at Joshua Tree National Park but with way less people. And as you know, way less people is my jam. We were looking for an old gold mine that our new ham friend was telling us of. We haven’t found that yet but did see on the map a place called Teutonia Peak. It showed a trail to the top. Challenge accepted! We decided to drive up there and check it out. On the way we were greeted by a very, very sad sight. The amazing Joshua tree forest had been burned over last year. So sad, thousands of acres of burned and probably dead Joshua trees. Bummer.

When we were close to Teutonia Peak we saw a sign for some sort of World War I memorial and so we stopped to check it out. It has an interesting history and perhaps I will tell you about it some time. While we were checking it out we found a nice little camp spot. The area is a small island that didn’t burn and so as I type this I can see beautiful Joshua trees, cholla cactus, creosote bushes, all sorts of green vegetation.

So we decided to camp there and hike to the Teutonia Peak trail head, which wasn’t far away. As we started up the trail we could see the burn up close. Every single plant had been burned. In many cases all that was left was just a sooty spot on the ground. It is hard to believe that the fire was so intense that it burned every single thing. Plants and trees in the desert are pretty far apart and yet the fire managed to get them all. There are a few green tips here and there that hint that some might survive. If they get some rain and it sure doesn’t look there has been much if any this year so far.

We started the climb up Teutonia peak. From the scorched remains we could see that types of plants change as you go up. The Joshua trees become smaller and fewer and the juniper trees get larger and appear more often. The cholla cactus gives way to this flat, roundish cactus that I don’t know the name of. As we climbed the wind got stronger and stronger and as we reached the ridge that leads to the peak I had to tie my hat on or it was going to blow away! And there was no way in that terrain that I would have gotten it back. So, hat tied tightly we made our way along the ridge to the top.

The view from the top was spectacular! As is usually the case in the desert the view went on forever. So many interesting mountains and rock formations to look at. The top itself was a neat little place with a little rock alcove that had a natural seat and would have been a perfect place to hide from a rain storm. You could see some islands that didn’t get burned and it made us realize just how green this part of the desert used to be. I look forward to coming back in a few years to see how it is coming back. We also have much left to explore here. 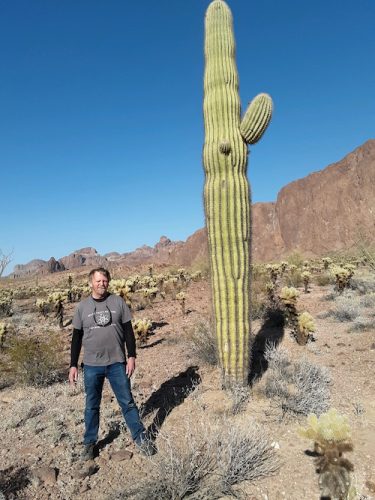 After getting back to Moby, we made some dinner. The wind continued to blow so we cooked outside but ate inside. It was getting chilly, especially with the wind still blowing. We watched a movie and then went to bed with wind making the antenna sing us a bedtime song.

Until the next chapter,

A YEAR AGO: A night in town.

FIFTEEN YEARS AGO: Getting declined all over the place.