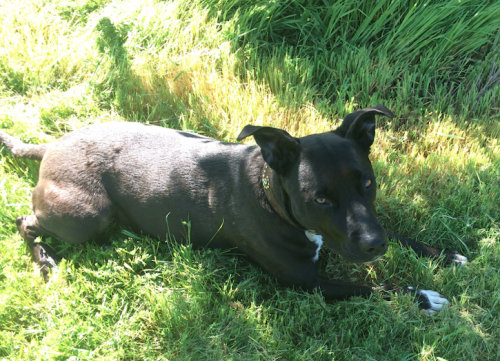 She was lying in the sun in the garden when she started coughing up blood. Stella started barking like crazy. She is not a barker or freaker outer, so she knew something was wrong*. Rob ran to get Megan, who was sleeping after her third 12 hour night shift of the week, and by the time they got back to the garden, Star was gone. Megan called me and we had what may have been the shortest conversation we ever had:

Me: Be right there.

I was glad I stopped by to see her on Friday and had that last visit with her. She and Megan walked me to my car, and I watched them in my side mirror until they were out of sight. Megan told me later that Star watched me drive away. I wonder if she knew it was the last time.

Star was still happy to see me on Friday, though she also seemed tired. I thought it would happen sometime this week, but not so soon. I was planning to visit her again over the weekend.

Star looked peaceful other than the blood. She was lying in the garden, near the rows of onions and garlic, her clean fur shining in the sun. Megan and I put Star on a soft, lavender flannel sheet and moved her to the bench of the picnic table for ease of petting. Stella again barked and ran around when we moved Star.

We spent a few hours petting and kissing Star, burying our noses in her silky coat to smell her familiar smell, or just resting our hands on her soft fur as we reminisced and cried, trying to begin to come to terms with this huge loss.

When the time came, Rob took Star for one last ride in the golf cart, in the front seat, of course. I walked behind them with my head bowed and my heart aching. I felt honored that I had been there for the beginning of Star’s time with us, and to be there at the end.

It was hard to say goodbye, and it broke my heart to see Megan so heartbroken. She couldn’t stop kissing Star’s face and holding her in floods of tears. Rob and I tried to keep it together for Megan. I rubbed her back as she bent over Star, whispering her last words of love and comfort and giving a final kiss to that beloved, beautiful face.

Rob laid Star to rest gently, making sure she was tucked in before we filled in the grave, that final service for a loved one, as the late winter afternoon shone down upon us.

I am grateful for the 11 years we had with Star, and for the love, joy, and beauty she brought to our lives. Rest easy, sweet girl. You are forever loved.

*I later learned that even the most placid dogs have been known to bark at death. A friend told me that she was alerted to her mother’s death by their dogs barking up a storm. Maybe they are warning the pack that something is very, very wrong.