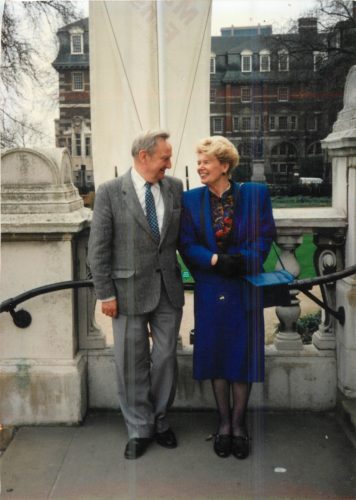 Dad and Margaret at the Tate Gallery, London

Today would have been my father’s 90th birthday.

Is it still his birthday when he isn’t here to see it? I would like to think it is. His birthday is always his birthday to me. This year it falls just four days after we lost our beloved Star, making it all the more painful. This year also marks the 20th anniversary of Dad’s sudden and untimely death. I guess it’s just sad all the way around.

Although Dad’s life was too short, it was a wonderful one. His last few years, with his much-loved Margaret, may have been the happiest he ever knew. I believe she was the love of his life. They were so happy together and had so much in common, growing up during WWII, loving travel and adventure, art, wine, good cooking, and family. Margaret was the perfect travel companion, happily hopping on African buses full of people and livestock in the tropical heat, or sitting by a dusty roadside waiting for the bus to get repaired and start up again. It was all good fun to her, and she never complained, all while being perfectly dressed and coiffed at all times. I am so thankful for the love and joy they shared, right until the end.

I’m proud of Dad’s work and how he helped to get DDT banned and get the peregrine falcon off the endangered species list, as well as his work on the effects of oil spills and detergent dispersants on sea birds, and his efforts to clean up the Great Lakes. He was often called on to be an expert witness, and his work lives on, continuing to be cited by other scientists and inspiring young scientists to do new work. When he died, he was still editing the scientific journal “Ecotoxicology”, which he founded, and was set to chair an international OECD meeting later that month. He was still working, still making the world a better place than he found it.

But more than a great scientist, he was a great father. He just wanted all of us to be happy. He never pressured us to follow in his footsteps. He knew all the worst things about me, and loved me anyway. He always gave me great advice, and he was never wrong.

I am lucky to have been known and loved like that. And to have had a father who was my best friend.