Cider pressing day dawned fair for a change. For the first year, it was rainy; last year, it was cold enough to move all operations other than the actual pressing inside Rio’s house.

When I pulled up at Rio’s estate, the boys were hard at work setting up the new (to us) press. Instead of borrowing our friend and neighbor’s apple press, this year my brother Jonathan invested in a 30 year old press. It’s still a hand-operated press, but this one has separate parts for grinding the apples and for pressing them. 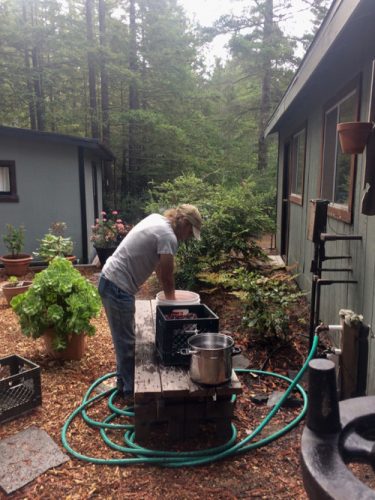 Megan, Rio, and I halved or quartered them, depending on size: 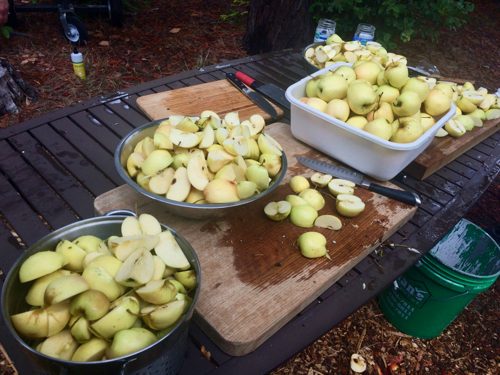 It felt like the Sorcerer’s Apprentice. No matter how many apples we chopped, there was always more. Here they are in the hopper of the grinder, which was mostly manned by Jonathan, but also manned by Rob and Clayton: 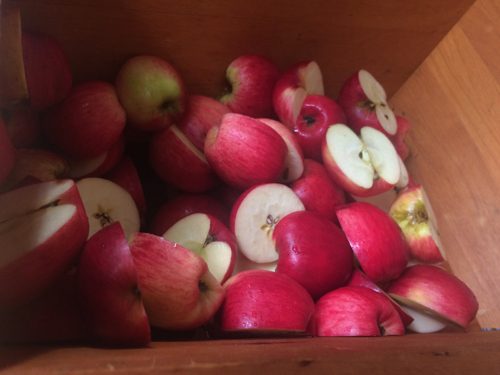 You can see Jonathan valiantly grinding the apples in the background.

We went through several wheelbarrows of “pomace”, or crushed apples, which all had to be wheeled to the compost pile. 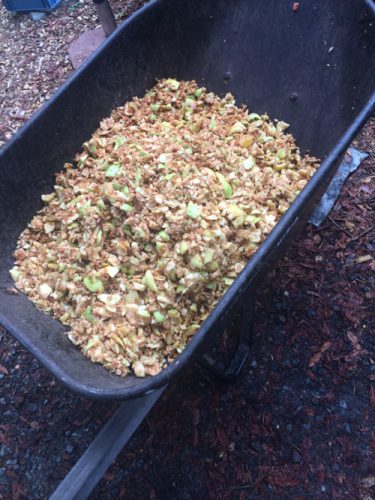 We took a break for lunch, which was corn chips and salsa made almost entirely from our garden-gown ingredients, including cherry tomatoes, jalapenos, and apples. Apples are great in salsa! Fun fact: the bowl was made by Clayton himself. He’s not just a master painter and apple presser!

Then it was back to work. Jonathan estimates that we made about 40 gallons of cider, or twice what we made last year when we and the rest of the coast had such a poor apple crop.

When we were finally done, we cleaned up and toasted another successful cider pressing. Dinner was garden slop and pasta with garlic bread, followed by raspberry sorbet made from raspberries my siblings grew: 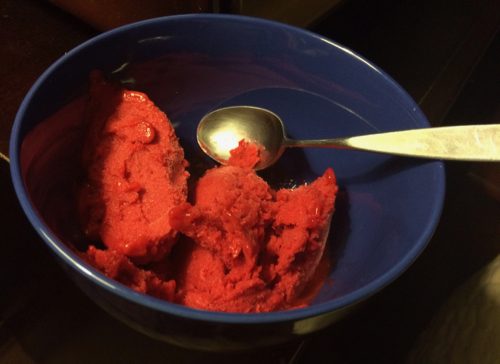 I can’t describe the intense berry taste of sorbet that only has two ingredients: raspberries and sugar. It was the perfect end to a lovely dinner and a hard-working day.

A YEAR AGO: A chilly day for cider prep and pressing.

FIVE YEARS AGO: A busy and action-packed trip to Atlanta. Those were the days, though I didn’t know it then.

TEN YEARS AGO: Voting day, and it was a nerve-wracking nail biter. Again, those were the days and I didn’t know it then. I’m sensing a theme here.