It’s still raining them. And the forecast is discouraging:

I thought that Clyde’s increase in naughtiness was a fairly recent thing, but my blog archives tell me that it has been nearly three years since he started his early morning wake up campaign. This is why it’s so useful to keep a journal. You can see when things actually happened instead of relying on your ever less reliable memory.

He no longer asks to go out first thing in the morning. He has been significantly less interested in the Wide World* since we lost Roscoe. Some days, he doesn’t go outside at all. He still sits on my desk and watches the woods, even if the door is open. It’s hard not to think that he is looking for his brother or remembering him. Audrey too has decreased outdoor interest, perhaps since she will be 10 this year. She still has extra outside privileges, but she no longer stays out for hours.

Clyde has recently expanded his naughtiness to eating Audrey’s food. I realized that his evil plan is to eat all of hers while hoarding his. Oddly, Audrey, who has no problem bossing around humans and dogs, is apparently reluctant to boot her miscreant little roommate out of her dish.

Audrey, like her namesake Miss Hepburn, is already sufficiently sylph-like, so this is a problem. I have been putting her dish up on Rob’s masterpiece so she can eat in peace, but of course Clyde knows it’s there and jumps up as soon as Audrey leaves. If I were at home all day, I’d put her food away and bring it out every couple of hours, but since I’m gone around 12 hours a day, that’s not possible. I guess I will just have to let Clyde be naughty and fill up Audrey’s dish whenever it looks empty, no matter who ate it.

On this rainy morning, they are both curled up on the untidy bed as I write, looking cute as buttons and innocent of any domestic infractions whatsoever.

As for the “dogs” portion of this post, the one I attempted to murder with my car three months ago is finally home, looking none the worse for wear: 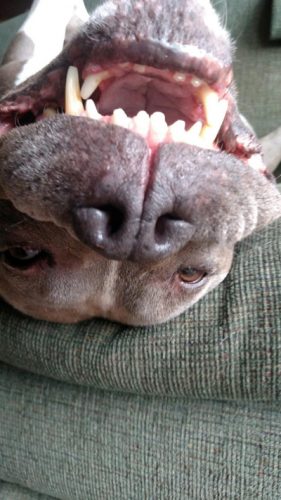 though his owner’s wallet will take some time to recover from the $8,000 vet bill. The dog was in rehab in the Bay Area and staying with his owner’s mother while he recovered, so they had a joyful reunion. I am hoping to stop by and see them both soon.

Stopped at a red light, I saw the guy in the truck in front of me put his arm around his dog and drop a kiss on his head. When the light changed, he drove off with his arm still around the dog.

*I have to agree with the River Rat on this one. Now more than ever: “Beyond the Wild Wood comes the Wide World,” said the Rat. “And that’s something that doesn’t matter, either to you or me. I’ve never been there, and I’m never going, nor you either, if you’ve got any sense at all.”

A YEAR AGO: Stormy weather. I’m sensing a theme here.

3 comments on “Cats and Dogs”