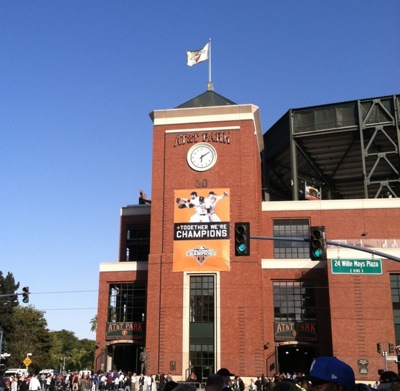 My birthday dawned foggy, but the sun began to shine as I stepped out of my taxi in front of the Four Seasons. The doorman said, “Nice to see you, miss,” which he probably says to everyone but which made me feel special. I have loved doormen since the one at the Huntington Hotel rescued me from an early morning butt grab several years ago.

I was there to attend a seminar. The seminar itself was preceded by lunch, which was quite nice: spring greens with strawberries, marcona almonds, and balsamic vinaigrette; salmon and beef tenderloin for those who like such things, and a tray of fruit kabobs and cupcake pops, surely one of the greatest of modern inventions. I soon learned that it’s a little awkward to make polite, work-related conversation with total strangers while attempting to eat a salad in a semi-graceful manner.

The seminar itself was interesting and I learned a lot. After the seminar, we piled into a Mercedes mini van that drove us to the ballpark in plush style. The company hosting the seminar had reserved a luxury box for that evening’s game, which was the Toronto Blue Jays versus the Giants.

I highly recommend the luxury box experience. You get ushered in past the lines of peons and into an elevator. Once you reach the box floor, you can look down on the little people: 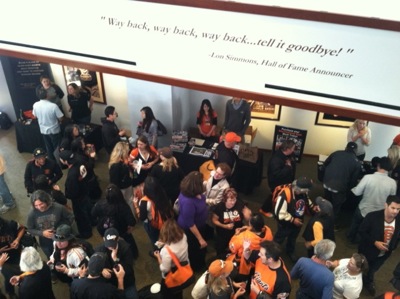 The suite had comfortable leather sofas and chairs, a buffet, and was literally draped with bags of Cracker Jacks and plastic-wrapped candy. There was beer and wine and big bowls of popcorn and peanuts. Here’s a blurry shot of it: 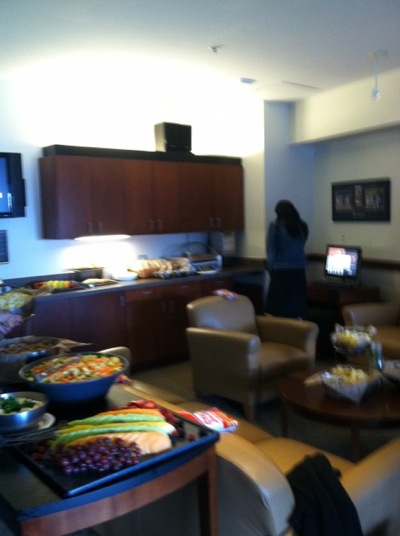 You can watch the game from inside or outside, where the chairs are cushioned and there’s a ledge for your plate and/or glass. So civilized!

Here’s the view from the box. Note the Canadian flag. You will be glad to hear that I sang BOTH anthems. 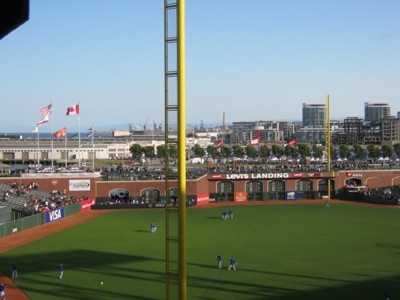 Getting the field ready for the game: 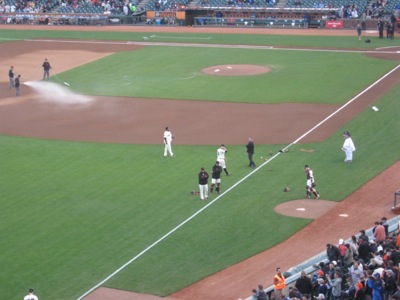 That’s my favorite Giant on the right, the wonderful and wonderfully named Buster Posey. I love my Giants, but I hoped the Jays would win. I’m a Gemini, after all. I was thrilled to see Tim Lincecum, “The Freak”, in real life. Even though he’s been in a slump lately, I have always liked him. His pitching style is so unusual and balletic that it was a real pleasure to watch him. I’m glad for his sake that he got a win. I miss his hair, though. The long hair suited The Freak in my opinion. Those crazy, misfit, World-Series winning Giants. 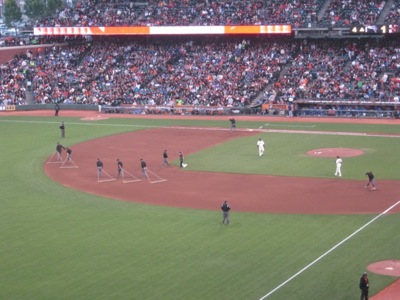 The Jays lost to the Giants 2-1, but on the following day, they got revenge on their hosts by beating them 4-0.

It was so great to be back at the ballpark after so many years and just revel in the experience.