I’m coming to you from the jobette, where things are more annoying than usual. I arrived to find that there is a car show blocking off the street, so I had to park elsewhere and then make my way through the maddening crowds to get to work. Not being able to park at work – usually, because some interloper has stolen one of the three spots allotted to us hard-working non-profit staff – always makes me irate. Maybe I need to learn to meditate or something so I can deal with parking banditos and people who drive below the speed limit.

The car show, for reasons best known to the motorheads in charge, is accompanied by blasting, bass-pounding music that reminds me of the bad old days in Oakland. I already have a headache and despite that, am contemplating an adult beverage when I get home.

Maybe I just need a vacation.

Last Saturday was Roscoe’s and Clyde’s third birthday. After my birthday Suzy Q, I came home and opened a can of tuna for the kitties to celebrate the boys’ birthday. Audrey jumped right in, but the boys sniffed at it, poked at it, and walked away in disgust. Now, that would be my reaction, too, but I never thought a cat would scorn tuna, especially birthday tuna.

Clyde sat hopefully next to the kitchen cabinet where The Treats are stored (Clyde lives for treats), and sure enough, he had trained me well enough to dispense treats to everyone. I put the rejected tuna away and Audrey ate the rest of it over the next few days. I have a year to think of a better birthday dinner for next year.

There seems to be a new cat in town. Last night, Audrey woke me up, growling in her “Get the hell out of here” way in the living room. I came downstairs and put on the outside light by the kitchen (I leave the outside light on by the garbage cans to deter bears and other undesirables. So far it’s worked, or Luna has kept them away). Anyway, Audrey and I both saw a light-colored cat slink into the trees in the direction of the haul road. It took her a little while to de-puff and de-grrr. She takes her territory seriously. I probably don’t have to tell her she’s in charge when I go away – she always is!

This morning, I saw the cat again. It’s a large orange cat with a striped tail, and once again he was heading to the haul road. Clyde was watching carefully from inside the house. I’m assuming it’s a male, since orange cats usually are. My sweet Sophie*: 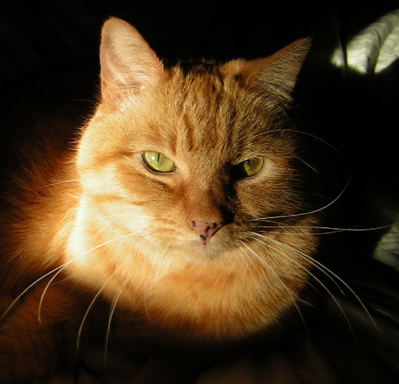 was the purry exception to that rule.

I stopped by Megan’s place on my way home from work on Wednesday, and in the thirty seconds or so it took me to walk from her place to mine, the power went out. It was very windy, so that was undoubtedly the culprit, but it was surprising this time of year, and I was totally unprepared. It’s a different experience having the power out when it’s light and warm out, but I was still glad when the house started to hum again.

*She was Buddy’s constant companion, right until his last breath. She died of a heart attack on May 24, 2005. John said she looked very peaceful, as if she just went to sleep. She was the sweetest and shyest of our cats. Now only Jack, the adorably naughty Siamese, is left. John still has her and my mother’s cat Twice.