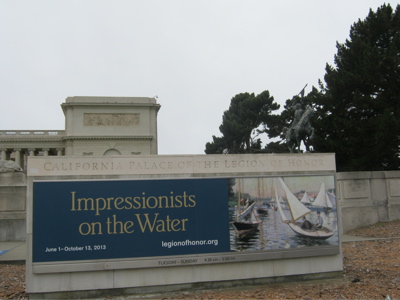 Despite going to bed after midnight, I woke up the day after my birthday at a dispiriting 5:45 am. Sleeping in is not among my few talents.

I discovered to my horror that there was no coffee in the hotel room, necessitating the almost unspeakable ordeal of having to get dressed and face the outside world in a pre-caffeinated state.

I shuffled off to the nearest Starbucks, passing the Mason Street cable car turnaround. The brakeman waved and said hello. Tip to tourists*: there is no line at 6 am and you will probably have the cable car to yourself and an unobstructed view of the dawn breaking over the Bay as you ascend the hill.

At Starbucks, I was immediately peppered with questions by the friendly staff. I explained that I was unable to process these questions because I hadn’t had coffee.

Barista One: I stopped at a 24 hour Starbucks to get coffee. On my way to work…at Starbucks.

You’d think the 7-11 confession would be heresy in that complicated chapel of caffeine, but everyone laughed. They helped me choose a medium light roast, and the guy behind me ordered quickly and fluently. I said, “You’ve done this before,” and he said, “Every day. Every day.”

Armed with much-needed caffeine, I dragged my remains out to my beloved Legion of Honor to see an exhibit called Impressionists on the Water.

As usual, photography was forbidden. Arriving at the exhibit, I literally gasped at the sight of a huge Monet painting of the sea screened on the wall behind a graceful wooden boat which had featured in one of Caillebotte’s paintings. I asked the guards if they would let me just take a picture of that, but they regretfully said no, so you will just have to imagine it.

The exhibit was arranged chronologically, and it was fascinating to see how the Impressionists took their inspiration from classic marine paintings and made it their own, as well as how Monet’s style became bolder and more innovative as time went on. Several of the paintings were from private collections, so it was special to see those.

I was intrigued to learn that Caillebotte, perhaps best known for Paris Street, Rainy Day was a dedicated boatsman and eventually became a boat designer. A couple of the wooden boats he designed and used were at the exhibit. Called “skiffs”, they were small, wooden boats with flat bottoms which were moved with oars. Apparently, they were quite dangerous and glamorous at the time, and they featured in many of the paintings.

Leaving the museum, I was asked to take a picture of two visiting teenage girls, who then asked how to get the Golden Gate Bridge. Seems I’m always a tour guide, no matter where I am!

*A more useful tourist tip is to get on the cable car at Van Ness and California, which is the end of that line. You can almost always get a seat, and you’ll pass by the Fairmont Hotel, which survived the 1906 quake, Chinatown, and have a stunning view of the Bay Bridge and the Ferry Building. Stop in for delightful restaurants and shops. /tour guide>