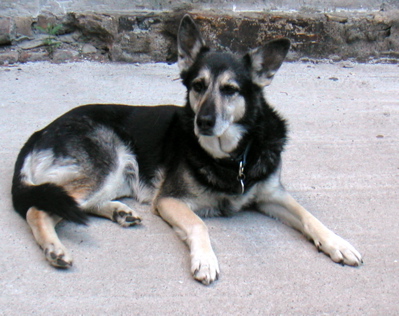 I hope possession really is 9/10 of the law, because I still have Rita, and after a month of her undivided adorableness, I really don’t want to return her to her lawful owner. I haven’t heard a peep from him lately, so I’m hoping he feels too guilty to take her away, and/or realizes that she’s perfectly happy with me and my toddler-free zone.

After looking at her picture, can you blame me?

And it’s not just Self who finds her irresistible. Far from it. One day in the park, all the dogs were cavorting around her. And yesterday, a big French poodle seemed to fall head over paws for her at first sight. He followed her around in the manner of Pepe Le Pew, and like the cats who so attracted Monsieur Le Pew, Rita was uninterested and unimpressed. This progressed to irritation when her admirer wouldn’t stop sniffing her butt. She had things to do. She looked at me pleadingly, and I managed to distract Monsieur Poodle long enough for her to get things done. I thought he was going to follow us home. Ah, those amorous Frenchmen!

On to the dog supply store, where dog treats are displayed on shelves at dog level on the outside part of the counter where the cash register is. I know that this is the usual method of selling impulse purchases, but it seems to me that the dogs are more likely to simply grab a treat and not pay for it. Possibly dogs are more polite and self-controlled than I give them credit for, but I still think it’s weird.

Time to wander home. Fortunately, Rita and I are tolerant of each other’s window shopping, hers for news of neighborhood dogs, and mine for shoes and handbags. We’re meant for each other.

3 thoughts on “The Rita Report”