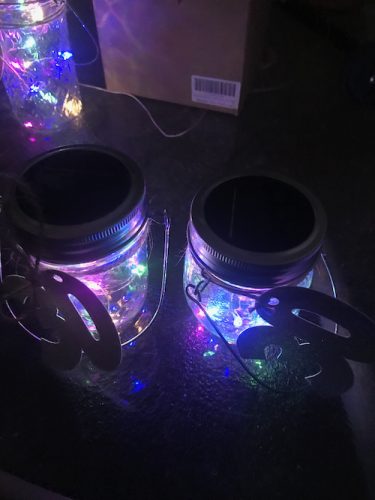 Megan and Rob tend not to make a fuss about things like birthdays and anniversaries, but this year marked not only Megan’s 50th birthday, but Megan and Rob’s 30th wedding anniversary. Our schedules didn’t match up to have a celebration of Megan’s first birthday in the 50s and mine, the last of the 50s, but we made sure to celebrate Megan and Rob’s milestone anniversary.

I’m sure this is a common experience for those of us barely hanging onto our 50s, but it amazes me that someone whose diapers I used to change (sorry, Megan!*) is now half a century old. And married for three decades of those 5 decades.

Even the most math-challenged among us can see that Megan married young. She had only been 20 for a few weeks when she took the leap to marry Rob, who at that point was not in a happy place in his life. I will be honest and tell y’all that I was not happy about it. But I will also add here that Rob won me over pretty quickly and I have stayed that way ever since. And whatever my misgivings were in July of 1991, Megan and Rob have proved me wrong. I am long divorced, and they have gone the distance. Megan always says that whatever life throws at them, they just take each other’s hands and walk through it. I think all of the joys and challenges they have faced together over the years have brought them closer together, and that they love each other more deeply and truly now than they did on their wedding day.

Being Megan, she ended up planning and making most of the dinner, though Jonathan and I did help where we could. Jonathan is always the grill master, and you can see why: 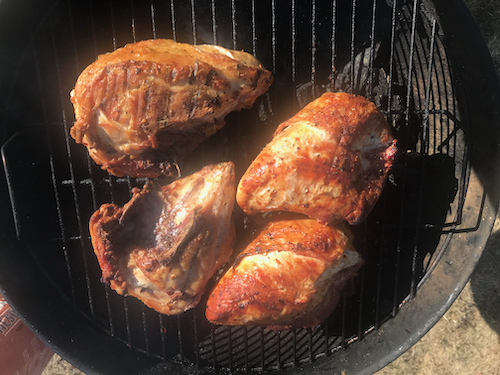 After the chicken was barbecued to perfection, it was sliced up and dressed with lemon slices that had also been grilled, and a mix of fresh lemon juice, garlic, and olive oil, as well as green olives. It was delicious. There was also a couscous salad, made with mint and arugula from the property and Parmesan instead of the feat the recipe called for (none of us are feta fans). For dessert, we had the first cherries of the season from Jonathan’s Awesome Cherry Tree**: 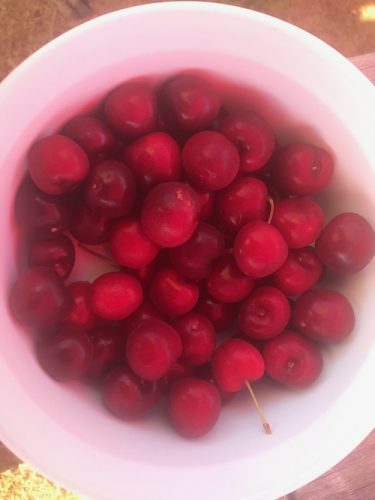 With dinner, we had some sparkling local wine to go with our sparkling conversation. After Jonathan headed back to his place, just a short walk away, Megan and I shared some limoncello, so I was lucky that Rob had volunteered to be my chauffeur, especially now that it’s a 20 minute drive to my place, instead of 2 minute drive. It was a happy celebration of a very happy occasion. Here’s to the next 30 years!

*Megan hates it when I talk about her babyhood and childhood. Interestingly, Jessica always enjoyed those stories about herself.

**When Megan finally convinced Jonathan that they should add a cherry tree to the orchard, it was decided that if the cherry tree worked out (apparently cherry trees do not play well with other trees and have to be netted to keep the birds at bay, so they are a lot of work – ours lives in its own little netted cathedral in the corner of the garden), it would be Jonathan’s Awesome Cherry Tree, but if not, it would be Megan’s Stupid Idea. So far, it has been all Awesome, all the time.

A YEAR AGO: Getting shady.

FIFTEEN YEARS AGO: An interesting weekend.

TWENTY YEARS AGO: Visiting the farmers’ market at the Ferry Building. I’d love to do that again one of these days.