I often call the family estate The Sunstroke Savanna. There is basically no shade, and it’s hotter than that it was at my old house (a mere quarter mile away) or my new one (about 12 miles away, but still in Hooterville). As is the California way, it is also significantly colder there in the winter than it is or was at either of my houses. I would often go over there in the winter to find a hard frost or ice when there was none at my house.

Megan and Rob decided that they needed some shade at their place. They bought some shade sails to go in their capacious back yard: 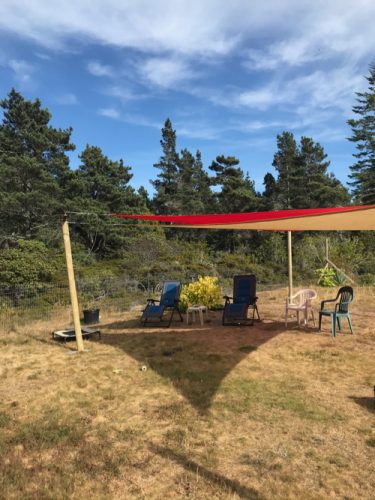 Megan said that when she ordered the shade sails, he didn’t think about how she would hang them up. The answer was that Rob cemented in poles and strung the sails on wires. In fact, he was shopping for these supplies when his car broke down and he needed rescuing a couple of weeks ago. So everything is built Rob tough. Of course the sails will come down for the winter.

Megan is hoping to put in some plants that will twine around the poles and make them look prettier, especially when the sails are down. Plans are also afoot to put up fairy lights and add some movable curtains on the west side to shield us from the hottest rays of the sun on the hottest days.

There are already lounge chairs for humans, and more importantly, lounge beds for Star and Stella. Things are looking beautiful and everyone is enjoying the shade, from the dogs to the humans (and back again).

FIVE YEARS AGO: A surprise shower.

FIFTEEN YEARS AGO: Some random wit.