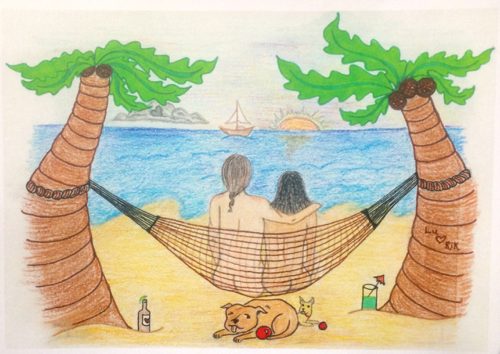 The invitation definitely set the tone for Lu and Rik’s wedding. Drawn by Rik’s daughter Rachel, it invited us to a “BBQ bash and wedding celebration” and “a glorious time with family and friends”. It was all that and more.

When I arrived at Rik and Lu’s home after work on Saturday, it was a perfect sunny summer day. You could tell it was Rik and Lu’s wedding from all the EMS and search and rescue stickers on the guests’ cars. They have been EMTs for many years, so naturally most of their friends are in the same line of work. As I observed to Megan, the guests could not have been in better hands in case of any possible emergency.

The carport was transformed into a buffet, decorated with flowers, where there would later be a taco bar and cake. The outdoor clawfoot tub was the bar, filled with ice holding beer, wine, soda, and water. Next to that was spiked strawberry lemonade and mojitos in big glass jars. 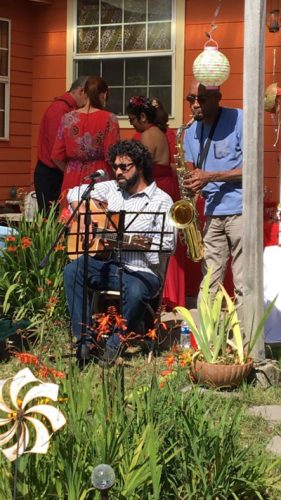 as we gathered on the lawn (you can glimpse the groom and bride at the bar behind the musicians in the photo). Kids and dogs, including Rik and Lu’s dogs Harlow and Sweetpea (seen under the hammock on the wedding invitation with their ever-present ball) were running around and playing together. There were hay bales arranged in front of the deck where the ceremony would take place, covered with colorful cloths. The deck was beautifully decorated: 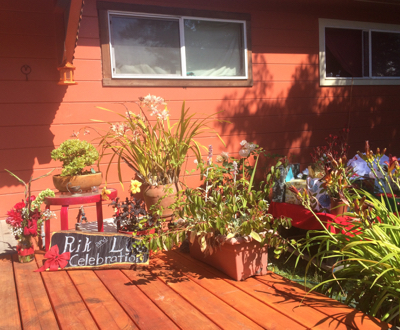 Rik built it himself over 36 hours. It must be very satisfying to build the place where you will be married with your own hands.

Lu carried flowers from our family garden in her bouquet and in her hair, including some of the sweetpeas we plant every year in Dad’s memory. She had cut her dress, but not as much as Megan and I had feared, and Lu thought it was still too long in the back, though I said it was like a train. She wore sparkly red sandals and no make up. She looked like our beautiful Lu, only more radiant and joyful than I had ever seen her before.

When it was time for the ceremony, the bride and groom came out of their front door hand in hand, accompanied by the Justice of the Peace who officiated. Rik jumped the gun a little by kissing his bride before the vows, to the crowd’s laughter. He looked like had won the lottery during their simple, yet deeply moving vows: 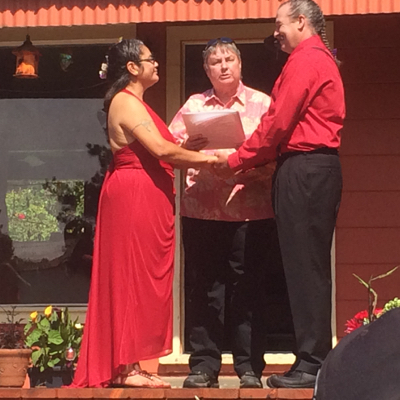 They exchanged rings made of gold they had panned themselves on trips to California’s gold country. They love to travel, and have had many adventures over the seventeen years they have spent together, with many more to come.

At last Rik was allowed to kiss his new wife: 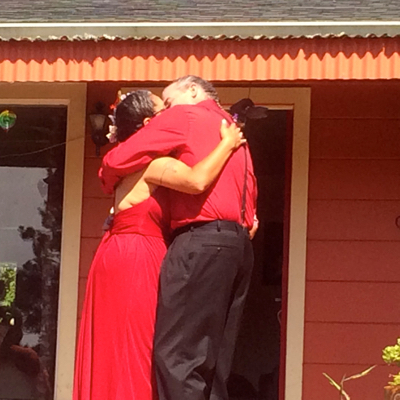 as the crowd went wild, including Jonathan, Megan, Rio, Rob and me. I love how the whole wedding was so them: warm, unpretentious, loving. I can’t tell you how wonderful it was to share the love and joy of these two beloved friends with my beloved family. It was a day I will never forget.

Congratulations, Mr. and Mrs. Davis! Here’s to the new chapter in the story of your love.

A YEAR AGO: Erica’s brilliance. Do I have amazing friends, or what?