The first thing when planning a successful sleepover is to get the right assortment of snacks: 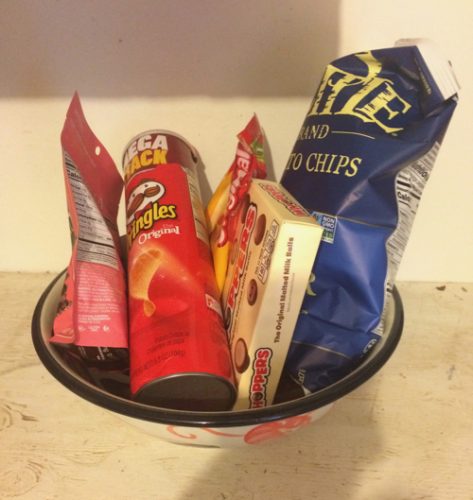 Salt and vinegar chips, Pringles, Starburst, Almond Roca thins (did you know those existed? If not, go and get some. You can thank me later) and Jessica’s favorite Whoppers pretty much covered all the bases as far as I was concerned.

I was planning to leave work a little early to pick up a pizza in the Village, but Erica said she would bring it from Stone & Embers in the Valley. She also brought some salad greens and a pear, so we had a lovely salad along with our delicious pizza: 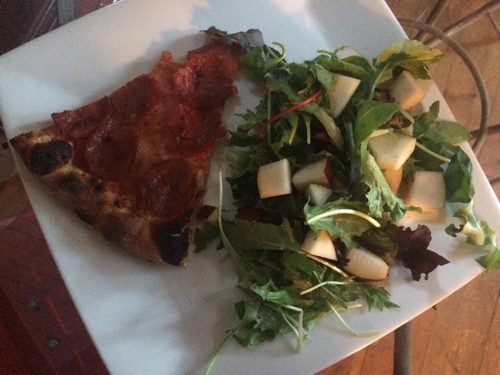 Erica headed off after dinner, blasting K-pop in the Hagmobile since Jessica was staying overnight at Stately Suzy Manor. Jessica has a limited tolerance for really loud K-pop. Sometimes it seems like their roles are reversed, with Erica being the rebellious teenager and Jessica the tolerant mom. This usually happens much later in life, but Jessica has always been precocious.

I asked Jessica which movie she would like to watch from my vast library, and she asked for “Breakfast at Tiffany’s”, saying, “I’ve never seen it, but I have a feeling it’s so you!” And so it is. We were enchanted with the legendary Audrey’s hair and wardrobe, as well as the vintage New York scenes. I would love a sleep mask and tasseled earplugs like Holly’s! During the party scene in Holly’s apartment, Jessica observed, “It looks like your place at Christmas or Thanksgiving!” She added that she would have preferred it if Holly did not have a romance with her neighbor, and I told her that was not in the book. She said, “I’ll have to read the book.” I am looking forward to introducing her to the inimitable Truman Capote and his remarkable way with words.

After that, we watched “Legally Blonde”. I have to admit that it’s one of my favorite movies and I consider it to be perfection of its kind. I never get tired of watching it, and like “Auntie Mame”, it always cheers me up.

Megan headed home after the second of our double features. It’s still weird that she no longer walks to her house through the secret path through the woods, but drives down the Ridge instead.

Jessica and I watched a couple of episodes of “Daria” after Megan left. I love Daria and her hilarious cynicism. I agree with Jessica that her mom is just like Jane Lane. And we both have a crush on Trent.

Eventually I made up a bed for Jessica on the couch, where she was joined by Clyde as she drew that day’s Inktober drawing before drifting off to sleep under the ancient quilt her mother had restored for me. Clyde is an excellent muse and sleeping companion. Those are hard to come by.

A YEAR AGO: Fires and quakes. All right here in our County.

FIVE YEARS AGO: Lots of travel. Those were the days.

TEN YEARS AGO: A close brush with jury duty.