Gifts are not a big part of Junapalooza, but the gifts this year were definitely sentimental in nature.

Rio, whose birthday it was, asked Megan, Erica, and me to each choose a number from a little bag. Then she produced a basket lined with greenery and filled with delightful, locally produced things: candles, cider vinegar, jam, and chocolates. Rio gave the basket to Megan, who chose number 1, and she chose something from the basket. Then it was Erica’s turn, and then it was mine. We kept passing the basket around until all of the goodies were gone. So fun!

Erica had asked for a Spirograph. Apparently she had always wanted one. When it arrived, the giant box (why?) it came in was badly dented, and so was the tin the Spirograph was housed in. I brought this to the seller’s attention, and they shipped me a new one and said to keep the damaged one. Rob was delighted to get the dented one (needless to say, he has already undented the tin). Two for one Spirographs: what’s not to love?

Megan made Rio her very own Mouse. You may recall that Megan started making Mice when she was a very small child for our father to keep him safe on his many travels. Later she made Mice for Jonathan and for me. I carry mine every day I drive to the Big Town, and I only recently learned that Jonathan does, too. Our Mice have never failed any of us.

Rio is a native southern Californian, and most of her family lives there. The rest lives in Oregon, so she travels a lot. Megan thought Rio needed her own Mouse, both to keep her safe on her many journeys but also to let her know she is part of the family and that we love her very much.

It’s safe to say that mission was accomplished on all counts. She was delighted.

As for my gift…

A few months ago, Megan was cleaning out her bedroom and came across a fragile old quilt that our mother’s mother, Nana, had made. She showed it to me excitedly, and I’m sorry to say that I burst into tears, surprising both of us. Nearly 40 years after Nana’s death, seeing something of hers so unexpectedly affected me more strongly than I would have thought.

While this was not exactly the reaction Megan anticipated*, it gave her an idea.

She also found a quilt Nana had made but never backed. So Megan, Erica, and Jessica all worked together to find fabric, quilt it, and bind it to the nearly 80 year old quilt. They chose a black and white backing to be neutral: 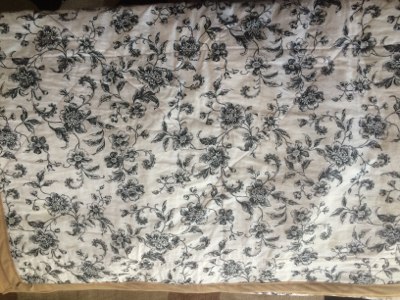 compared to the bright pink quilt and its colorful pieces. I know that some of the fabric Nana used in it came from Mom’s baby/child clothes, some from Nana’s aprons, and some from Hoho’s (our grandfather’s) ties: 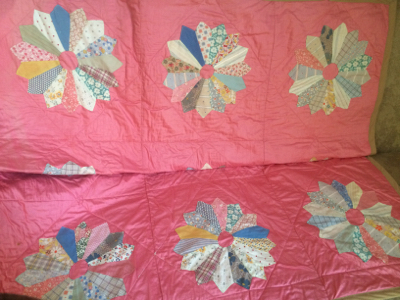 It took a superhuman effort not to cry in front of all of those people, but it was one of the most wonderful gifts I have ever received. I like to think of subsequent generations working on my grandmother’s quilt, and of her never-still hands stitching it, choosing which pieces to use in her pattern. I’m glad that it has finally been finished and restored and can be used again.
Thank you, Nana. And thank you to my sister, my chosen sister, and the daughter she had for me. I love you all.

*A few years after my grandparents died, I came home from college for Thanksgiving and took my grandmother’s hand crocheted tablecloth out of the sideboard to use for dinner. I was sobbing over it when Megan, who was about 12 at the time, walked by and snapped, “At least you have something to cry about.” She was 6 when they died and knows she missed out on something pretty great. Also? I did stop crying. Even at that early age, she had the skills that would stand her in good stead in the ER and on the ambulance.

A YEAR AGO: Remembering vacations past. Is there any other kind?

2 comments on “How to Make an American Quilt”