I am pleased to announce there is a new member of the family. Meet Dodge! 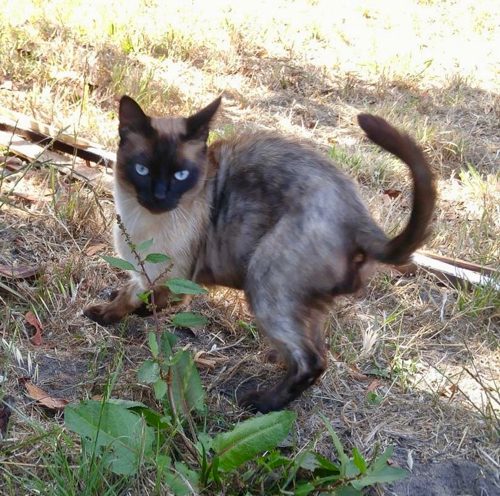 A stray cat followed my coworker Susan* home from the Dodge dealership. He was so friendly that he chased after her like a dog, and she eventually picked up and carried him for a couple of blocks to her house. She couldn’t keep him, so she took him to the shelter.

At the shelter, they found that he had no microchip. He was skinny and starved, and had lost a lot of fur due to fleas and a violent, Audrey-style flea allergy, but was otherwise OK. They guessed he was about two years old.

I called them to let them know I was interested in meeting him. They told me that they had found his owner. I said I was glad for him, which I was, though I was also a little disappointed. I told myself that it wasn’t meant to be.

The shelter called back not 15 minutes later to tell me that they made a mistake and he was still available. I went to meet him, and after much debating with myself, I decided to adopt him. Mostly I was concerned about making eight year old Clyde and eleven year old imperious Audrey upset. Also, and I know this sounds a little crazy, it was like admitting that my adored Roscoe was really, truly gone. Putting out Roscoe’s old dish made me burst into tears unexpectedly.

While I was having my little meltdown, Dodge was hiding somewhere in the studio. But he didn’t hide for long. He is the most affectionate and friendly cat I have ever met. He has a way of jumping against you while rubbing against you that I find endearing. Here he is in the studio: 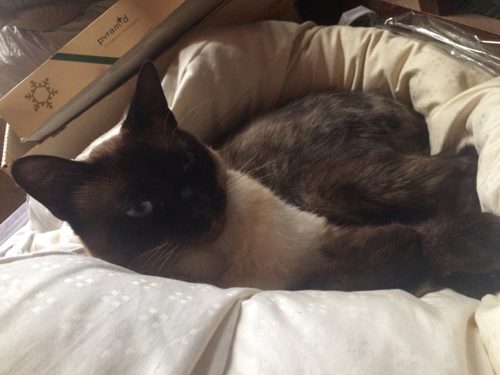 He now likes sleeping between the pillows and hanging out on the bed upstairs.
Audrey looks at him in disdain like she does everyone else. I am hopeful that Dodge and Clyde might be friends and playmates one day. They have touched noses and sniffed each other without hissing or growling. There’s still a long way to go, but I think it will work out in the end.

*There are a lot of us, but I have noticed that Susans tend to be what the French call “a certain age”. We are probably going extinct, since they aren’t making new ones.

A YEAR AGO: The horror of the worst heatwave ever.

TEN YEARS AGO: Back from visiting my sister….where I now live.