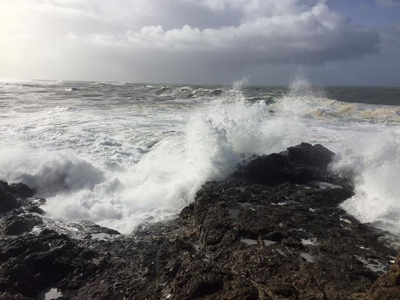 On Fridays, it makes me happy to know that my siblings are happily asleep as I jolt workwards down the muddy driveway in the early morning darkness. The driveway is puddlier than ever thanks to the stormy visitors we have had lately. I am beginning to think that whoever did those rain dances to end the drought may have overdone it. The driveway is either dust or mud, depending on the time of year, and its muddiness has reached new heights (or depths, depending on how you look at it) this winter. I don’t think it’s ever been as potholed and puddled as it is now. I flinch for Wednesday as I am tossed around the car, even at less than five miles an hour.

Thursday’s storm was particularly intense, with heavy rains and high winds. We had already received five inches of rain this week before that storm. I hate to admit it, but I’m kind of done with the rain. At this point, everything is saturated and it’s just causing landslides and fallen trees, which in turn cause power outages.

We had a power outage at work this week. Oddly, it was calm and not raining when it happened, and it affected the entire Big Town and the Village while leaving Hooterville untouched for once. The generator kicked on to power the lights in the clinic area, and patients were still seen, using paper charts. The receptionists print out schedules ahead of time during stormy weeks. I used the time to catch up on my filing, which I had not done for a couple of months due to fundraiser madness and human nature’s* general dislike of filing.

I did enjoy the unaccustomed feeling of virtue, though, and the lights came back on shortly after I completed the filing so I could get back to work on computer-related tasks.

This morning dawned clear and bright. I was momentarily confused when I woke up and saw the moonlight, wondering what it was in my precaffeinated state. I will enjoy the lightness and brightness while it lasts. We are due to get more storms next week. The calm before the storm…

*Among my filing were some old personnel records, one of which included a resignation letter saying that working at the clinic had made this person grow as a professional and “a human been.”

A YEAR AGO: A delightful day with surfers, ballet and Thai food. What more could a girl want?

FIVE YEARS AGO: Poor Rob. And his pain in the neck.