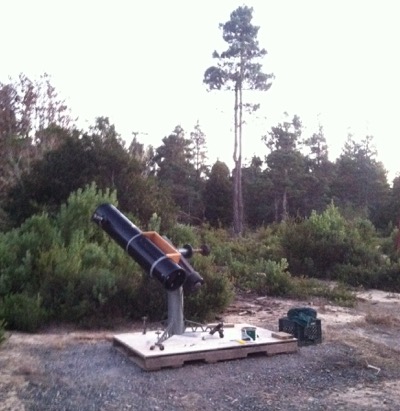 NASA worthy contraption. Doesn’t everyone have one?

What better way to celebrate my 6th anniversary of moving to Hooterville than a BBQ with my family and our old friend Paul?

We have known Paul since the long ago Pier 39 days, when he, Megan, and Jonathan all lived on boats there. Now he lives in Florida in the winter, where he hosted me a few years back, and in the Hamptons in the summer, where he caters for the rich and (in)famous and refuses to give me any celebrity dish, no matter how many times I ask him. He claims the stars don’t talk to the help, but I remain convinced that he’s holding out on me.

Fortunately for us, he also caters to the poor and unknown, and he and Megan pulled up at our brother’s place with bags full of food. Jonathan had the wood going in the Weber – no charcoal briquettes for us – and Tenacious D blasting. Paul set to work cutting up chickens and marinating them in soy sauce, Dijon, brown sugar and vinegar: 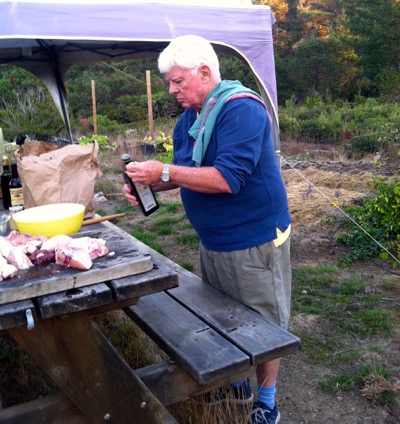 Before moving on to slicing up sweet potatoes and zucchini, which he dusted with a magical blend of spices before putting them on the BBQ.

It had been a while since Paul visited us, so the Waltons-sized picnic table my brother built was new to him, and I reminded him that the slab of quarter-sawn white oak he was using for a cutting board (seen in the photo above) was the piece Jonathan cut out to accommodate the sink on the slab of wood he installed as a counter top in the kitchen of my San Francisco apartment many years ago.

Paul was on a road trip with his 90 year old father and much younger uncle. They had driven from Florida on a magical mystery tour of meeting various relatives, some of whom Paul had never met before and his father hadn’t seen in decades. We were a brief stop between San Francisco (where Paul’s Dad and uncle stayed while Paul came up here) and Seattle, where they are headed next. Paul says they will all stop by on their way back to San Francisco, and will hopefully stay for a couple of days.

While dinner was slowly cooking over the BBQ, we admired the NASA sized telescope which a fellow ham radio aficionado had given to my brother: 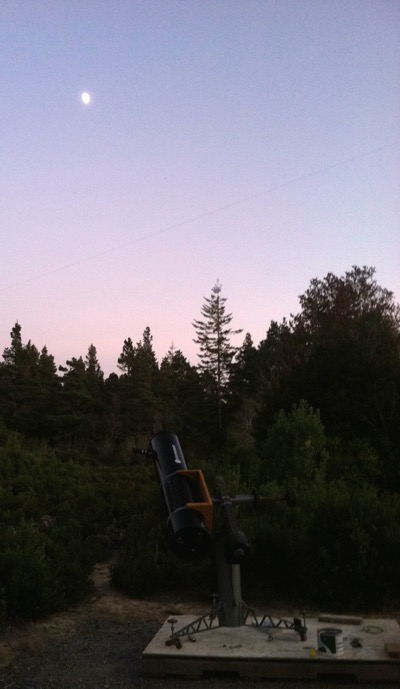 For free. The reflective lens needed cleaning, which Jonathan did, very carefully, and other than that, the whole contraption, which dates back to the 1950s or so, is in perfect working order. He aimed it at the moon, and I was completely unprepared for what I saw when I peeked through the lens. I could see every crater, dip, and mountain on the moon! The shadowy side was ridged with mountains, not at all smooth, the way it appears from a distance. I could practically see the flag planted up there. It was amazing.

Dinner was also amazing, and it was great to sit by the fire after a long day, eating and talking with some of my favorite people in the world. I’m glad Paul is coming back soon and we’ll have more time together.

A YEAR AGO: Cats vs. birds. And a sad farewell.