Well, the week started out with a bang that made me whimper.

When my boss arrived on Monday, she flooded my desk with a tsunami of hand-written paper, all of which had to be typed up or made into charts: 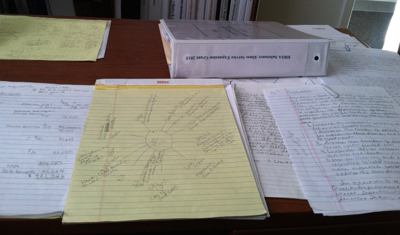 While I was still assessing the damage and estimating the girl hours to get it done, she asked me to come into her office and close the door.

My boss then told me that she is retiring at the end of the year, aka two months from now. An internal person has agreed to take the job, and she does not have an assistant, so I’m assuming I still have a job. But it will be different, and I kind of feel like I’ve had enough new jobs and bosses over the past few months. I tried not to take it personally that she’s leaving six months after I arrived. Maybe it will be a good thing. I will almost certainly be typing fewer hand-written pieces of paper.

Later, as I sat at my desk packaging up the remains of my boss’ lunch for her to take home to her dogs (a literal doggie bag!), I thought of how weird my job is, and that was before I got the call from the woman in Hawaii who is looking to adopt and would like us to give her a heads up if any patients tell us they would like to give up their child.

When I got home, I found deconstructed bird all over the lovely living room carpet: 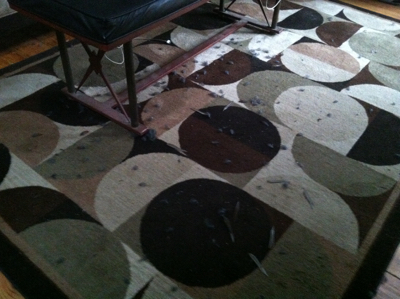 Deconstructed birds are much more delightful in high end restaurants than on my floor. It was the perfect end to the perfect nine and a half hour day. After I vacuumed, I had a dose or two of Vitamin V, which always improves my outlook.