We ended up getting 3/4 inch of rain! My lazy side (is there any other?) was happy not to have to water the garden, though the rain did seem to revitalize the mosquitoes. Every silver lining has its cloud? 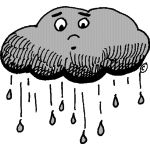 Wednesday required a follow up visit to the car spa in Santa Rosa. Apparently whatever they did last time needed a minor-ish adjustment, and since it was part of the warranty repair, all it cost was about five hours’ driving and a tank of gas. I can’t tell you how nice it is to be able to take the key out of the ignition on the first try, and to have the dashboard warning light- and beep-free. I’m hoping that this has finally solved all of Wednesday’s woes and that the car curse is broken.

A girl can dream.

The other day, I stopped on the Ridge on my way home and gave a lift to Michael. He is an older gentleman who can often be seen riding his bike around Hooterville. When Schatzi was missing, he was very helpful in searching for her, especially since he was not in a car but able to cover a good distance. As you know, we never did find our beloved girl, but it was comforting how our little community rallied around and did its best to help.

On this evening, he was on foot. I stopped and asked him if he would like a ride – he often says no when he is on his bike, but I keep asking anyway – and he was very happy to hop in. I asked where his bike was, and he said that he had hitchhiked to the Big Town that day and was on his way back.

I asked him where he lived, fairly confident that it wouldn’t be as far down the Ridge as I am, and it turned out that he lives on the same road as Lichen. Not just the same road, but on the same property! Not only that, but someone had just bought the property, which had been for sale for years, and he and Lichen have six weeks to find somewhere else.

As I was digesting this shocking news, Rob passed us and I waved and smiled. Michael said, “That’s Robert.” I said yes, he is married to my sister. Michael was surprised and pleased with this information, and spent a few minutes telling me that Rob is a good man, very smart and very funny. It was nice to hear that someone appreciates Rob as much as his family does.

I offered to drive Michael all the way home but he preferred to walk down his road. He said that he lives in a ten foot by ten foot cabin and wasn’t ready to be inside just yet. I told him I’d keep an eye open for a new place for him and went on my way.

I expect that whoever bought that property will tear down the little houses and build something new, and I don’t like the thought of people who would kick tenants out of their homes with inadequate time to find shelter moving into our little community. One of the nice things about living somewhere so isolated is that it tends not to attract people like this. I hope it’s not a harbinger of change. And it’s hard not to worry about it happening to me some day.

Yesterday, my little abode seemed more like Grand Central than a little hippie hovel deep in the woods.

Mark came by to borrow season two of “Dexter” – he and Citlali are both completely hooked on it, and while he was there, checked out the cupboard in the pantry/laundry room that came off about a year and a half ago and which he has been promising to fix since he got home from New Jersey last year. He thought he might have the right hinges somewhere, and went off to look.

He came back with them and they didn’t fit, so he made a note to look the next time he’s in town.

I started dinner – chili cashew chicken stir fry – and Rob knocked on the door. He was looking for Parmesan since the Gro was closed, and fortunately, I still had a piece left over from the pasta with pesto, chicken and artichokes which I had for dinner the night before.

I gave it to him along with a belated birthday hug – Rob turned 50 on Thursday and I hadn’t seen him to give him a birthday hug and kiss. We really need to get it together with our celebratory BBQs this year – I still haven’t had mine, nor has Jonathan. And note to Self: let Jonathan know that he has been promoted to my big brother. He and Megan are the only ones still hanging onto their 40s.

I had just sat down to dinner and “Murder In the First”, a very enjoyable policier set in San Francisco and actually filmed there, when Citlali came by to borrow some conditioner for her beautiful girls’ beautiful long hair. I gave her the rest of the bottle, knowing all too well what it’s like to try and detangle long hair without conditioner.

I love how we can all help each other out. We’re all in this together!

Update: Megan tells me that Lichen knows the guy who bought the property. Apparently the new owner’s vision is to make the little houses an “artists’ colony”, and since the new owner knows Lichen, has enlisted his services to find a contractor to renovate the houses. Lichen can stay in his house and be an on site caretaker, though everyone else has to move. They have sixty days to find new places, which is better than six weeks.