Before I tell you about the county fair, I have an announcement to make: it’s raining! It started yesterday evening and I rushed to put the hanging plants out so we could all enjoy the welcome, effort-free watering. I was thrilled to find half an inch of rain in the rain gauge this morning (imagine its surprise) and the usual leak puddling on the kitchen floor. As I write, it’s still raining and the garden and I are sighing with happiness. The kitties, not so much.

Roscoe has gone back to bed, as he often does in weather which is not up to his standards. Audrey is sitting on the front porch glaring at the rain, and Clyde is sitting on the back porch, watching it like it’s a movie.

As for the fair, Megan and I ventured to the beautiful Valley on a Sunday afternoon, the last day of the festivities. It was foggy on the coast, but sunny in the Valley, where the giant apple (does it have a name? Andy Apple sounds good to me) greeted us: 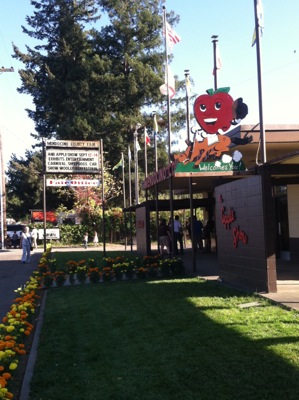 Inside the fairgrounds, we passed the Ferris Wheel, which always reminds me of Henry and Fern in “Charlotte’s Web”, and also of my horror when I actually tried it out a few years ago: 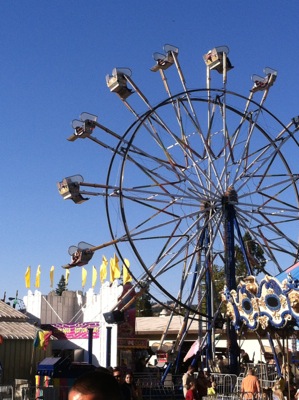 We met up with Jessica, who scampered off to go on the rides with hr friends, and Erica, who was our fearless guide to the fabric and fiber building. Inside, someone was demonstrating the correct way to shear a sheep, and Erica’s gossamer shawl had taken every prize known to fairdom: 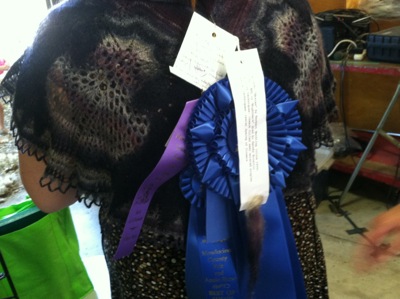 including grand champion, first place, division champion…you get the picture. I imagine her fellow contestants heartily wish her back in Portland when fair time rolls around.

She spun, dyed, designed and crocheted (or possibly knitted) this wonderfully webby creation herself. Even Charlotte would be impressed: 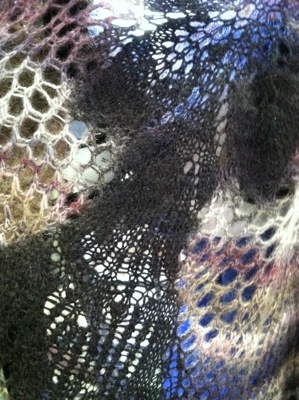 and no photo can do it justice. I did try, though.

Jessica had a couple of her haikus prominently posted in the window of another building: 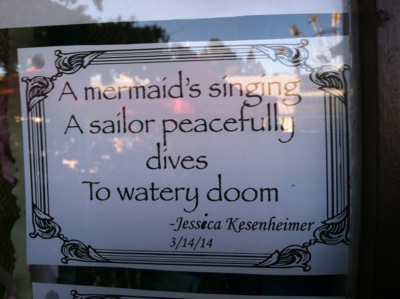 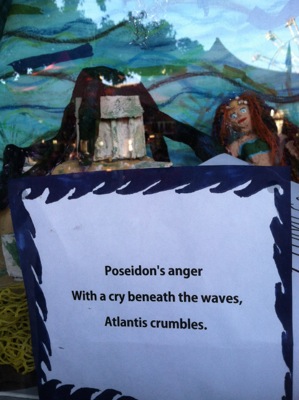 I love how she mixed mythology with Addams family aesthetics.

Jessica was excited to show us the “snack size sheep”, but alas, they had packed up and gone home. We soon learned that the major drawback of going to the fair on Sunday afternoon is that the 4-H kids had packed up their bunnies and fancy fowl and things like that, as well as most of the animals, which are kind of my favorite part. There’s always next year…

We stopped by the agricultural building to admire the biggest pumpkins: 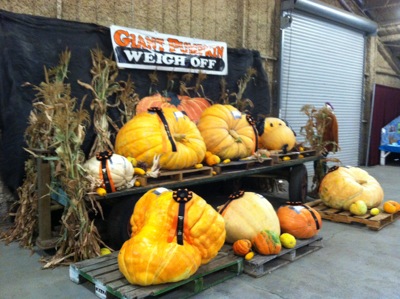 The biggest one was 700 pounds!

Jessica posed by the array of apples: 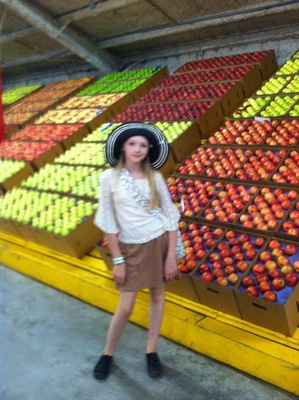 I remarked wistfully to Jessica that she wouldn’t want to meet up with us at the fair much longer (this was the first year she had gone off to the rides with her friends, and she is 11 and a half now), and she said cheerfully, “The hormones haven’t kicked in yet!” Then she added, “Maybe I’ll be like you and never grow up.”