My hard-working sis is working an extra shift this week, and I stopped by to say hello and goodbye this morning. Attire: kitty pajamas, sweater, and sandals (like Peppermint Patty, I wear them even in winter). I was surprised that the car was full of dogs and she was ready to go. It turns out that she had come over to my house yesterday morning, only to find that I was already gone to the jobette (I left early to buy groceries, gas, cat food, and go to the library).

She was planning to drop the dogs off at our friend Lu’s house, where they can play with their friend Harlow and run around the big, fenced yard while Megan is at work. At least we had a couple of minutes to catch up with each other’s news (Megan’s cat Ramona is experiencing age-related health issues; I had my hair cut) and promise each other we’d try to spend some time together on Friday. For girls who live about 100 yards away from each other, we don’t see each other very often. Still, it’s good to know she’s there.

The wonderful Angelika cut my hair on Friday. It was high time, since the last time she cut it was in March! On my way there, I came across a flock of little boys riding their bikes down the Ridge, each with a fishing pole tied to the handlebars. They rode into the parking lot at the firehouse to let me pass, waving and smiling. It was kind of an Andy Griffith moment. Nice to know that kids still want to go fishing with their friends on a fine, late summer day.

At Angelika’s little salon in the big woods, the garden was looking lovely: 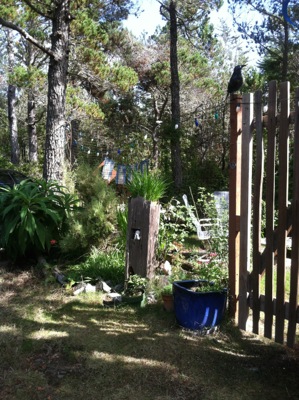 As was I after my haircut. Angelika is from Germany, where they apparently take hair styling very seriously. She studied for four years, as if it were college, apprenticing after two years. She has never said so, but I think she’s appalled that in the US, it’s about nine months of training instead. All I can say is, even after six months, my hair still had its shape, even when I didn’t blow dry it.

She and her boyfriend have been converting their garage to an artist’s studio, installing windows that she traded haircuts for. Her boyfriend traded cutting down trees for lumber, which somehow seems appropriate. I love how this kind of thing is still possible around here. A visitor told me this week that we live in a sort of fairyland up here, and sometimes, it seems like we do.

It’s not all fairies, though. Some of it is bugs.

Like the cricket who found its way onto my stove, leaping away in horror when I turned the burner on, then retreating to a safe distance to watch the proceedings with interest, occasionally waving his antennae in approval.

Or the termites wafting gently through the autumn sunlight. I didn’t even know they flew until I moved to Hooterville. They eventually lose their wings, which lodge nicely in the cobwebs the less Martha Stewart among us have in our houses, and retire to eat someone’s house, possibly mine, though I have not caught them yet.

On the other hand, Erica’s insect encounter was less benign:

“My washing machine just broke because a banana slug got electrocuted on a circuit board.

Now I’m looking for new fuses to solder in, after cleaning out slug bits and carbon, because soldering that thing in is going to be cheaper than the $450-600 to have a repairman replace the board.”

The hazards of living in the country. Or fairyland. You decide.