I was on my way home from the jobette last night when my phone rang. I don’t usually answer the phone in the car*, but I was stopped at a light, and far enough back that I knew it wouldn’t be my turn to turn onto the highway before the light turned red again (hello, summer!). Also it was Rob, who rarely calls.

Rob was at the hardware store a mere two blocks away, shopping for wiring for the bathroom fan and other sundries, so I met him there. We divided the labor by the socialist principles of “Each according to his need; each according to his ability”, meaning that Rob picked stuff out and I paid for it. It worked out well, since I still have no idea what the difference is between finishing nails and escutcheon pins (though I enjoyed saying “escutcheon”) or what kind of wiring we needed. The little basket of sundries cost about $60, but it’s still cheap at the price.

It was fun to spend time in the hardware store with Rob (and spend time we did – there was a fair amount of meandering involved), and I’ve really enjoyed working on this project with him. I think he is having fun using his manual skills and his creative, design skills. Also I love him.

We went our separate ways from there. I stopped off at the post office and UPS on jobette related issues, then went to my coworker and friend’s house: 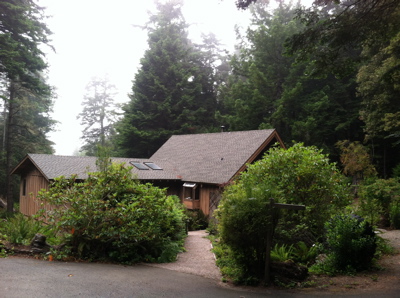 to let her cats back into the house and feed them. She is on vacation so I am cat sitting. Her cats are the total opposite of mine: I had to physically eject one of them, and she tried to get back in. When I arrived that evening, they were sitting sadly on the front porch, looking as if I were late picking them up from school. I bet Megan wishes my cats were more like these cats!

*Well, it’s illegal. But it’s mostly because I hate talking on the phone. I consider the lack of cell service around here to be a plus, rather than a minus.