I’m pleased to announce that the floor is done in the bathroom: 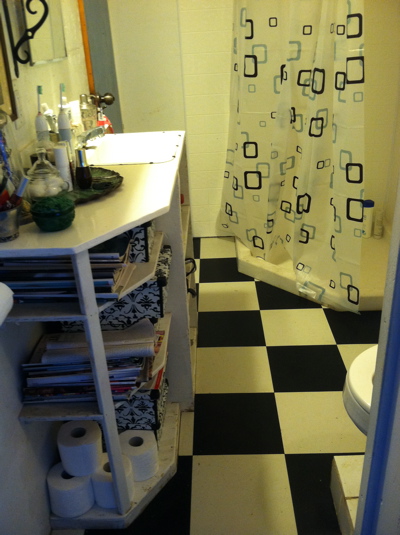 So much nicer than lime green plywood! Here’s what it looked like in progress: 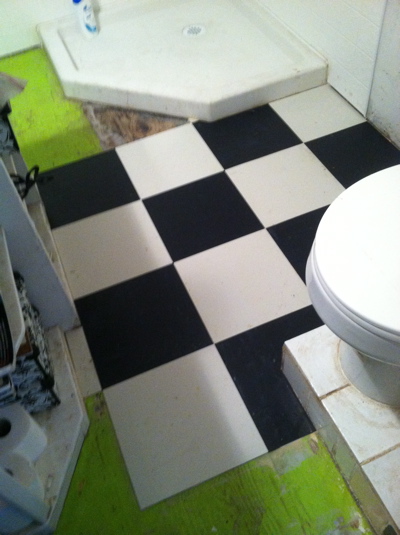 Rob did it bit by bit, partly because the tiles are not self stick and needed some kind of goop to be applied and then set for a day or two before being walked on, and partly so I was still able to use the bathroom while the floor was being worked on. When I couldn’t use the sink (the stage above), I realized that other than the bathroom, I only have one mirror in the house (upstairs on the side of the armoire/cat perch), a shocking oversight on the part of the frivolous and vain.

Rob thinks the whole room should be repainted (or painted at all, since it’s apparently just primer on there now), but I can’t say the project fills me with enthusiasm.

What I am enthusiastic about is the new door. Rob and I went to visit our neighbor who sold us the screen door for the sleeping loft’s balcony (for which I am thankful more than half of the year) to find one for the bathroom.

We wanted one that was narrower than the existing door, so it could actually clear the shower pan when opened, and had glass panes to let in light. We found one that was a little narrower (24 inches wide) than we wanted (though still wider than Megan and Rob’s front door, a mere 18 inches), but really beautiful:

The door needed accessories, like hinges and a beautiful vintage doorknob set: 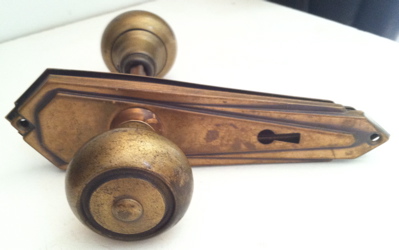 I may well be a doorknob, because the door and its accoutrements were far and away the most expensive items at about $200 total (the tiles cost $6 total, and the light fixtures and towel rods were free other than refurbishing supplies), and also totally unnecessary. I could have just kept the door I had, but it makes the bathroom really dark, even in the summer. Let there be light, I say.

As soon as Rob and I got back to my house, we looked at the other bathroom door, with its cheap, shiny knob, and Rob said, “That’s gotta go.” I agreed, thinking of the many other lovely sets at the neighbor’s place. I could get one that’s less expensive, right? That’s what always happens: you fix one thing, and everything else looks terrible. Good thing the labor costs are so low!