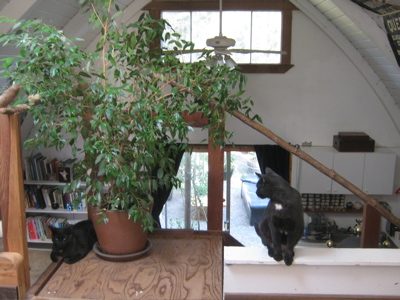 I’m up earlier than I’d like. As usual. When I’d like: 8 am or so. When I am: anywhere from 4:30 to 6:00. If I don’t stop these bad habits, I will never attain my lifetime goal of idle rich. Also, a girl must surely need more beauty sleep as she gets older, not less.

The boys found a new and novel way to get me out of bed today (and more importantly, to get breakfast and then outside into the early morning sunshine). This one involved rolling around on top of my unsuspecting body, clawing and biting each other’s heads with accompanying sound effects.

At least I didn’t get a new bruise to add to my collection. The old one is still there, now turning yellow at the edges while retaining its alarming lumpiness. It’s about 6 inches long and three inches wide, with the power to frighten innocent passers-by and co-workers. At least it doesn’t hurt any more and will eventually vanish into the mists of time, unlike some of the other scars I still have:

Considering my ability to damage Self in nearly any circumstances, it’s somewhat surprising that I have never had major surgery, broken a limb (though I did break two fingers recently), and still retain my tonsils, appendix, and two of my wisdom teeth. I need all the help I can get.